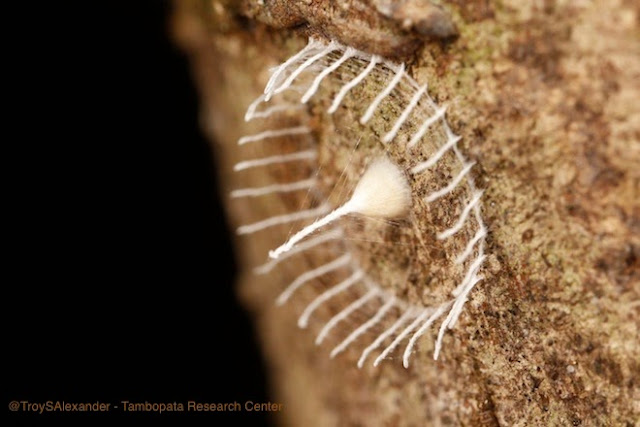 Something in the Peruvian Amazon is making weird, intricate structures that resemble white picket fences surrounding an Isengard-like spire.

No one has any idea who the mysterious craftsbug (fungus? spider?) is, or what the structure is even used for, excepting the fence part, which almost makes sense. Nobody, not even the scientists. We asked.

Troy Alexander, a graduate student at Georgia Tech, spotted the first of these structures on June 7. The little, seemingly woven fence was parked on the underside of a blue tarp near the Tambopata Research Center, in southeastern Peru. He later spotted three more of the bizarre enclosures on tree trunks in the jungle...

He described the fences as small – about 2 centimeters across... 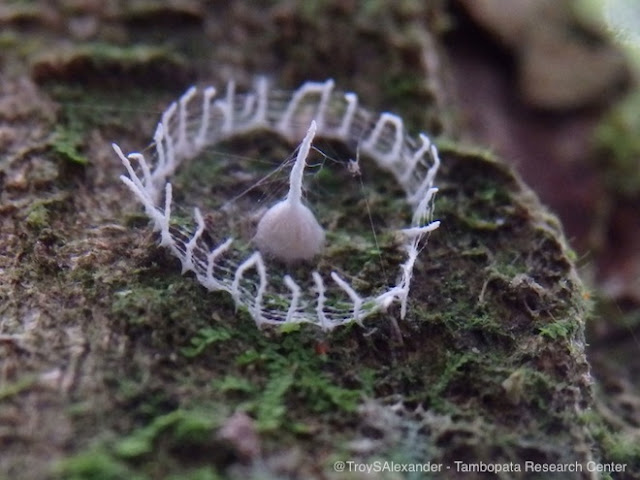 “I have no idea what made it, or even what it is,” said William Eberhard, an entomologist with the Smithsonian Tropical Research Institute.

“I’ve seen the photo, but have no idea what animal might be responsible,” echoed Norm Platnick, curator emeritus of spiders at the American Museum of Natural History.

“I don’t know what it is,” said arachnologist Linda Rayor, of Cornell University. “My guess is something like a lacewing, but I don’t really know.”..

“I have no idea,” said Todd Gilligan of Colorado State University, and president of The Lepidopterists’ Society. “Some moths construct an ‘egg fence’ around eggs, using scales from the abdomen to protect the eggs,” he said. “So constructing fences around objects isn’t unheard of, but I haven’t seen anything like this before.”

TYWKIWDBI gets about a thousand visits a year from readers in Peru.  Perhaps one of you know what creature creates these.

Text and images via Wired Science.

Addendum:  A comment on another website pointed out the similarity to a "fence" made by Ribbed Cocoon-maker moths.  But in that case, what would be inside the "fence" would be a cocoon, not an egg case, because the adult moth (presumably) is not capable of spinning silk - that's the role of the larval caterpillar.

If constructions like these are being found on tarpaulins, then I don't think they represent the fruiting bodies of slime molds or fungi.  I'm betting on an arachnid.

Addendum #2:   The mystery has been solved.  The structure is indeed the work of a spider, species identity still to be determined, but at least for the present tentatively (and cleverly) dubbed the "silkhenge" spider.  Here is video by Jeff Cremer -

- and some explanatory text from Wired:


Late last week, we revealed that the elaborate, fenced-in spires spotted in the Peruvian Amazon are made by spiders. We were with a team of scientists on the ground in Peru, who watched as three spiderlings hatched from eggs concealed at the base of the towers...

So far, we’ve been able to confirm, using photos and descriptions, additional sightings in Ecuador and French Guiana... We’ve also gotten unconfirmed reports of sightings from Brazil, several places in the United States, and Belgium, and are awaiting photos from those locations...

For starters, based on the silk in the structures, it seems likely we’re looking at a spider in the superfamily Orbiculariae, says Leslie Brunetta, who’s studied the evolution of spider silk. This superfamily includes spiders that weave cribellate silk, which is fluffy and frizzy like the silk in the fences, as well as all the spiders that spin orb-shaped webs. Over time, some of these spiders’ descendants have modified their orb webs to the point that they no longer resemble the original orb shape. Brunetta suggests the corral could be one of these modified orbs, with sturdy fence posts connected by fluffy, cribellate silk...

One possibility is that it’s built simply to deter predators... But it’s also possible the fences are acting to trap food for the spiderlings, such as mites, which were seen crawling inside and stuck on many of the fences.

A grateful tip of my hat to an anonymous reader for alerting me to the recent discovery.