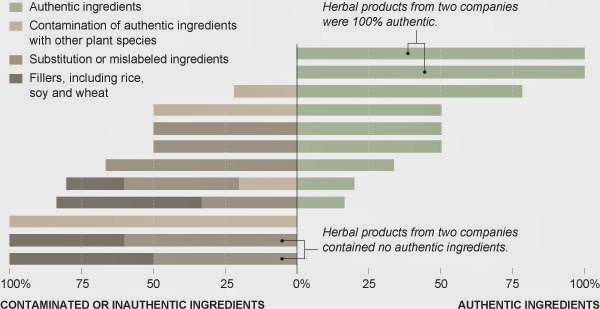 As reported in the New York Times:


Using a test called DNA barcoding, a kind of genetic fingerprinting that has also been used to help uncover labeling fraud in the commercial seafood industry, Canadian researchers tested 44 bottles of popular supplements sold by 12 companies. They found that many were not what they claimed to be, and that pills labeled as popular herbs were often diluted — or replaced entirely — by cheap fillers like soybean, wheat and rice.

Consumer advocates and scientists say the research provides more evidence that the herbal supplement industry is riddled with questionable practices. Industry representatives argue that any problems are not widespread.

For the study, the researchers selected popular medicinal herbs, and then randomly bought different brands of those products from stores and outlets in Canada and the United States. To avoid singling out any company, they did not disclose any product names.

Among their findings were bottles of echinacea supplements, used by millions of Americans to prevent and treat colds, that contained ground up bitter weed, Parthenium hysterophorus, an invasive plant found in India and Australia that has been linked to rashes, nausea and flatulence.

Two bottles labeled as St. John’s wort, which studies have shown may treat mild depression, contained none of the medicinal herb. Instead, the pills in one bottle were made of nothing but rice, and another bottle contained only Alexandrian senna, an Egyptian yellow shrub that is a powerful laxative. Gingko biloba supplements, promoted as memory enhancers, were mixed with fillers and black walnut, a potentially deadly hazard for people with nut allergies...

Of 44 herbal supplements tested, one-third showed outright substitution, meaning there was no trace of the plant advertised on the bottle — only another plant in its place.