A tribute at a funeral 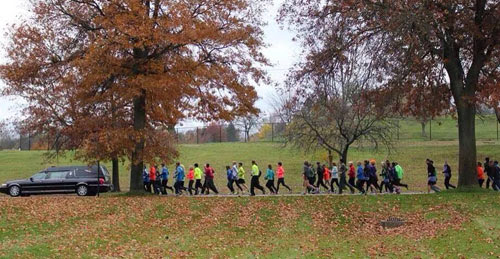 Excerpts from an article in Runner's World:


This powerful photo says so much about Jim Kelley, and it says even more about running.

My friend Jim died this month while out on a run, doing one of his favorite things in the world. A car struck him as he was crossing the street.

Jim was amazing and selfless. He placed in the top three in his age group 90 percent of the time. He loved to run, more than anybody I know, whether by himself or supporting others...

Jim wasn't a dressy guy. He loved jeans and T-shirts. Teri, Jim’s wife of more than 30 years, told everybody to come to his funeral dressed in their running clothes. That's how Jim would be buried, she said. Come in your tights and your running shorts. Wear your running shoes.

I was one of Jim’s pallbearers. When it was time to go to the cemetery, the funeral director had this idea. The cemetery was only a mile away, he said to us. Instead of vehicles following behind, would we want to honor Jim by running behind the hearse?

It was a genius idea.

The rest of the story is at the link.