Supercomet scheduled to arrive in 2013 - updated 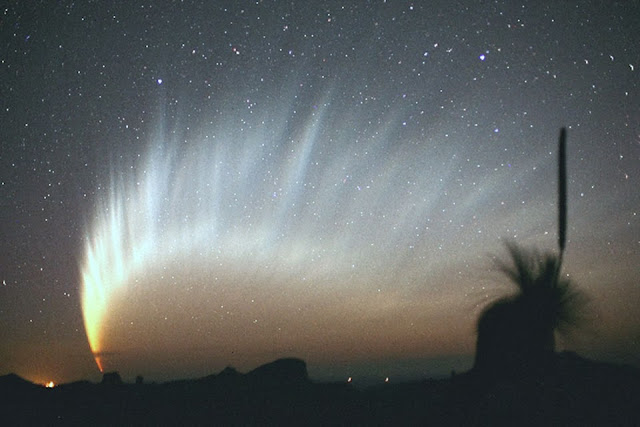 Calculations show that the celestial visitor could be dazzlingly bright in November 2013 and be easily visible in broad daylight as it rounds the Sun. Comet ISON is so named because it was first spotted on photos taken by Vitali Nevski and Artyom Novichonok from Russia using the International Scientific Optical Network telescope...

That makes it a type of comet called a sungrazer, and there is a risk that the comet - essentially a giant ball of rock and ice, will break up when it makes that close approach.

But it could become brighter than the greatest comet of the last century, Comet Ikeya-Seki, which excited astronomers in 1965...

Comet ISON, which has the official label C/2012 S1, appears to be on a nearly parabolic orbit which leads scientists to believe that it is making its first trip through the Solar System. This means it may have been dislodged from a vast reservoir of icy debris surrounding the Sun far beyond the planets, called the Oort Cloud. It is a giant ball of rock and ice that is likely to be packed with volatiles including water ice that will erupt as brilliant jets of gas and dust when it is at its best.

The article at The Telegraph indicates that this comet should be "fifteen times brighter than the moon."

Addendum November 2013:
A new article in The Telegraph reports that the comet is now visible to the naked eye:

The comet has dramatically brightened with an outburst of gases in recent days as it draws ever closer to the sun, the Times reported, and if it survives it could be the greatest celestial display in more than 300 years. It is now visible to the naked eye and is expected to continue brightening over the next few weeks until it outshines the moon...

If predictions are correct the galactic show will rival the Great Comet of 1680, which had a tail 90 million miles long and could be seen during the day because it was so bright, leading many to think it was a punishment from God. Even if Ison breaks up before then, or fails to survive its perihelion, its closest scrape with the sun, experts believe its death throes could be spectacular...

If the comet – which is best observed through a telescope or strong binoculars – survives its scrape with the sun it will reach its most brilliant in early December.

Please read Danack's comment from last fall regarding the size and location of the comet.

Within the next two weeks of 2013, rapidly brightening Comet ISON might sprout a tail that rivals even Comet McNaught.