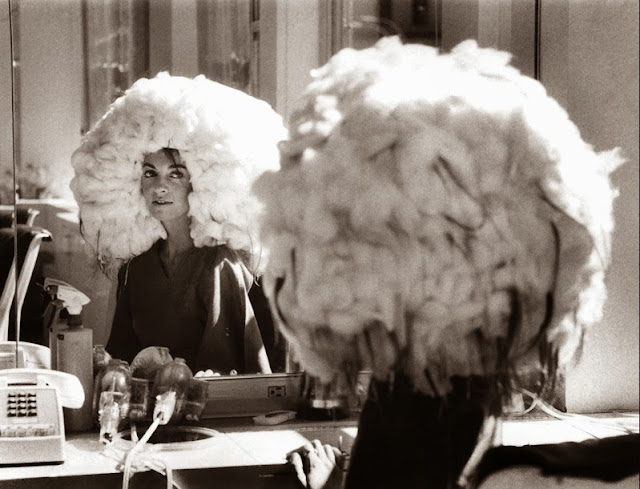 My curiosity was tweaked by the 1974 photo above, from the New York Times' Lively Morgue:


"“We never speak of dying,” a misspelled ad boasts, quoted in a roundup of hair coloring techniques available in the city.  While the procedure pictured here — which required 1,000 feet of cotton stripping — might resemble some kind of April Fool’s prank carried out by the colorist, it was apparently a real thing for fine hair, called balayage au cotton."

The caption that mocked misspelling in the advertisement had its own misspelling; I eventually found balayage au coton defined at A Way With Words:


n.— The shop has imported a young man named Yvan from the Carita salon in Paris to do what he calls a “balayage au cotton.” Starting at the nape, Yvan lifted out fine strands and applied a lightening paste with a thin brush. Instead of the usual foil wrapping, he tucked pieces of cotton wadding to support the strands in process and keep them from the rest of the hair. When he was three-quarters through, he had used 1,000 feet of cotton stripping and Miss Weston looked as though she were wearing an enormous white wig. The idea of the balayage (the word means sweeping) is to lighten fine strands of hair, rather than add color...


The most natural-looking results are usually those that look the most random, which calls for a very specific placement strategy... It’s important to note that balayage is definitely not just for blondes. Brunettes, redheads, even those with black hair can all take advantage of hair painting. The results will be subtle, but they’ll add the dimension that everyone craves, giving a dark brunette swirls of cinnamon or caramel, for example....

Foils often end up looking contrived - a neat row of uniform highlights. When a section of hair is colored using a foil, the entire section is saturated with color resulting in dense, unnatural stripes of color.


Balayage color is painted in soft brush strokes across the surface of the hair, leaving you with natural-looking swipes of color that flow from thick to thin and play off the hair's natural movement. Even better, balayage won't leave you with any signs of demarcation, creating a softer and more manageable grow-out.

I suppose women readers have known about all of this for years, but it was new to me.  You learn something every day.