A question about Terry Pratchett's novels

Over the past two months I've posted photos and stories about the bookcases and bookshelves of 18 readers of this blog.  After I featured Bruce and Carol's books and Emmy awards yesterday, I was struck by this comment from Adrian Morgan: 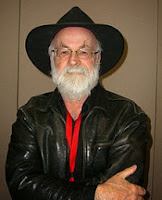 "I'm impressed that no fewer than three people in this series own a copy of the limited edition Once More With Footnotes -- the sure sign of a committed Pratchett fan..."

I've frequently seen Terry Pratchett mentioned at websites I harvest for this blog, but hadn't realized that such a high proportion of readers here were enthusiasts about his work.  Time for my confession:  I've not read anything by Terry Pratchett.  It's not that he lacks credentials or reputation -


Pratchett was the UK's best-selling author of the 1990s, and has sold over 85 million books worldwide in 37 languages. He is currently the second most-read writer in the UK, and seventh most-read non-US author in the US...

So my question to the readers of TYWKIWDBI is... where should I start?  It wouldn't have to be the best or most iconic work, but rather something to give me a flavor for the corpus of works.  (If I were introducing a naive reader to the Agatha Christie series, I wouldn't suggest The Murder of Roger Ackroyd as the first one to read).

Presumably the answer lies somewhere in the Discworld series.   I don't intend to read everything, so it shouldn't be mandatory to start with the first of the series.  On the other hand, if the novels build coherently on previous publications, would it be confusing or offputting to select a recent work for a first sample?

I await your advice...