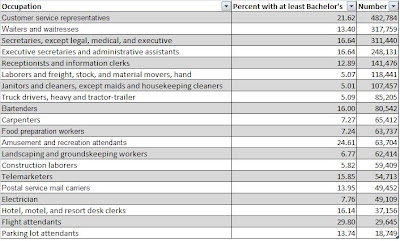 This week the Chronicle of Higher Education offered the chart above and asked "why did these people go to college?"


Over 317,000 waiters and waitresses have college degrees (over 8,000 of them have doctoral or professional degrees), along with over 80,000 bartenders, and over 18,000 parking lot attendants. All told, some 17,000,000 Americans with college degrees are doing jobs that the BLS says require less than the skill levels associated with a bachelor’s degree...

Now it is true that college has a consumption as well as investment function. People often enjoy going to classes, just as they enjoy watching movies or taking trips. They love the socialization dimensions of schooling—particularly in this age of the country-clubization of American universities. They may improve their self-esteem by earning a college degree. Yet, at a time when resources are scarce, when American governments are running $1.3-trillion deficits, when we face huge unfunded liabilities associated with commitments made to our growing elderly population, should we be subsidizing increasingly problematic educational programs for students whose prior academic record would suggest little likelihood of academic, much less vocational, success?

The article offers one viewpoint on a complicated issue; personally I think it's a rather narrow-minded viewpoint at that.  There are some thoughtful and well-informed counterpoints presented in the responses to the article.