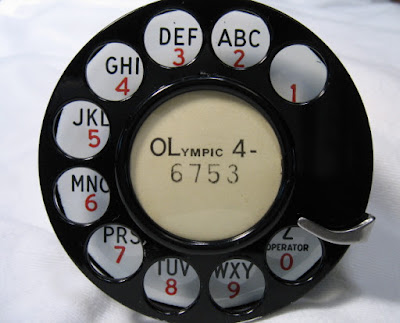 A hat tip to "Amy" for reminding me about the "exchange names" for the old-fashioned alphanumeric phone numbers.  At the link is a list of all the official names.


It comes from AT&T/Bell's publication "Notes on Nationwide Dialing, 1955". Many cities with EXchange names had for decades been using names which are not from this list, and they were not necessarily required to change the names. These names were supposed to have been chosen such that pronouncing the name should easily identify the first two significant dialable letters of the word, as well as quoting the two letters themselves wasn't supposed to be confused with other 'like-sounding' letters which were associated with different numbers on the dial. Since this list was Ma Bell's official recommendation, it covered the entire Bell system. If you do not have a historically accurate exchange name to use for your current telephone number, you should choose one from this list.

When I was a kid, our home phone was GReenwood 4-xxxx.   Everyone in the U.S. in the 1950s whose phone number started with 47x-xxxx would have used one of these names:


GRanite
GReenwood
GReenfield
GReenleaf
GRover
GRidley
There is a good discussion of these old phone numbers at Not Yet Published:


The amount of letters at the start of the exchange-name which stood for the exchange’s ID-number, varied from country to country, and even from city to city within a country! The number of letters was usually the first two or first three in any given exchange-name. In the United Kingdom, three letters followed by four numbers (3L-4N) was the rule. So Whitehall 1212 would be WHItehall 1212, or 944-1212.

In the United States, by comparison, phone-numbers followed the 2L-5N (two letters, five numbers) rule. This meant that the first two letters of the exchange-name stood for numbers. Notable exceptions to this rule were cities of New York, Philadelphia, Boston and Chicago, which followed the British example of 3L-4N. This brought up exchange-names like ‘PENnsylvania’, ‘TREmont’ and ‘ELDorado’. Since the rest of the country did 2L-5N, this could create some understandable confusion to people who weren’t from the US. East Coast. Eventually, these cities conformed with the rest of the nation...


PENnsylvania-5000, it was changed to PEnnsylvania-65000 when New York switched to the 2L-5N format. This number remains the oldest, continuously-used phone-number in New York City. Issued in 1919, it has belonged to the Hotel Pennsylvania in central Manhattan for the past 90 years! Dialling that number today (736-5000) still gets you the Hotel Pennsylvania, just as it did 60-odd years ago when Glenn Miller wrote his song! It’s usually spoken or written as ‘Pennsylvania six, five thousand’, because ‘Pennsylvania sixty-five thousand’ sounds a bit silly, doesn’t it?