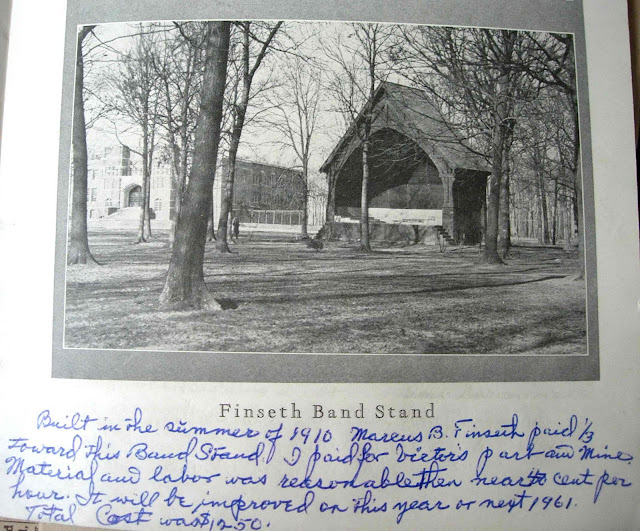 My family's ties to St. Olaf go back all the way to the school's founding, when my great-grandfather Ole Knut Finseth was one of three farmers who signed of the Articles of Incorporation of the college in 1875. As a youngster I visited with my uncles on many occasions for homecoming football games and marveled at the beautiful campus and the pretty girls who went to school there, but when my own college decision time came, I headed east.

As a result I don't remember ever encountering the Finseth Band Stand, pictured above with a note written by by grandfather Knut Olaus Finseth:

Music has always been an integral part of the life of students at St. Olaf.  The band stand played its part for several decades:


The Band would play there at appropriate times during the school year, such as the Seventeenth of May.  On May 7, 1939 a welcoming ceremony for Crown Prince Olav and his party from Norway took place in Finseth Band Stand.  It was used for various concerts in the spring and sumer.  Members of St John's Lutheran Church used finseth Band Stand as the place where the congregation held its annual outdoor service and picnic.*

When I Googled "Finseth Band Stand" I found only one hit, which linked to some memories of a student of that era:


How romantic the spring open-air band concerts in the Finseth bandstand were. Ida Marvick always sang two songs on such occasions, and we thrilled to her lovely voice. It seems to me that the moon always shone during those concerts. The air was full of springtime and the moonlight made soft patterns on the grass. We girls usually had a boy friend hovering near so that real romance filled our hearts. Lovely evenings they were. 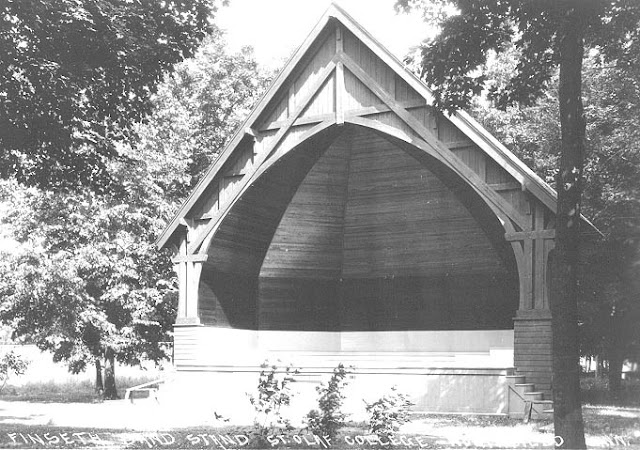 This second photo shows more detail of the band stand, including the fine (Norwegian) woodcraft.


One recalls the Finseth Band Stand as a wooden structure of a dark brown color on the exterior, the interior of the shell painted a lighter color.  Its original location was to the west and slightly south of the west wing of the men's dormitory.  Its open side faced southeast toward the wooded area between the men's dormitory and the site of the new ladies' dormitory, soon to be built, Mohn Hall.  Late in its life, Finseth was moved over to a spot somewhat to the west of Mohn Hall but it disappeared in 1967 when the Mohn Hall area was cleared to provide space for the Science Center.*

Shaw's history of St. Olaf (cited in footnote) notes that when Crown Prince Olaf of Norway visited the college in 1939, they were welcomed to the campus by a program at the bandstand.

My understanding from informal and secondhand sources is that in more recent decades the interest in and need for a band stand declined, while some concerts held there became more lively:


A less reverent employment of the stand, hardly in keeping with the piety of the donors, was the series of spring dances announced one year during the 1960s as "Sinfests at Finseth."

Late in its life, Finseth was moved over to a spot somewhat to the west of Mohn Hall but it disappeared in 1967 when the Mohn Hall area was cleared to provide space for the Science Center.*

And so it goes.

If there are any Oles out there who can provide additional details or memories, I'd be pleased to read your comments.

Addendum:  Tangentially related - an article at the St. Olaf website briefly reviews the history of (the absence of) social dancing at the college (none until 1961 !).