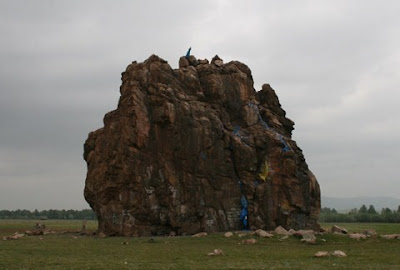 The large rock pictured above (the Taikhar Chuluu) is covered with a variety of scripts which have been added by visitors over a series of millennia.  Here is an English translation from the Hungarian blog mongγol bičig & manju bithe:


Mongolia is full of interesting and beautiful places. In the central region, along the Tamir river stands the Taikhar chuluu.

This is a huge rock, there is nothing similar in the neighborhood. The stone itself is not as interesting as the inscriptions on it and the legends connected with it. Long time ago the rock was called dai gürü. Dai is a Chinese loan-word (大) meaning big, while gürü means rock in Mongolian. The modern name Taikhar is a compound of these two words (the changes d>t and g>k are absolutely normal in Mongolian, and a similar change of vowels is also acceptable). Therefore it is unnecessary to add to the name chuluu which means ‘stone’, because this would mean something like “Big rock rock” (as if one said “CD disk”). The rock has a large number of inscriptions. Unfortunately, our contemporaries also leave their scraps on it, and as a consequence several old inscriptions are disappearing. Among the graffitis there are many very old ones, some written in the Turkic age [A.D. 6th century].

The Turkic inscriptions are not just epigraphic relics, their importance goes far beyond this. In fact, they attest that the rock was revered already in the Turkic period, and this tradition was uninterruptedly transferred to the Mongols. Thus the Turkic, Mongolian and other inscriptions prove the cultural relations and continuity between the various people following each other.

There are several Mongolian inscriptions on the rock, unfortunately the majority are near to illegibility. I can not present you a large inscription, simply because I could not decypher any longer one. However, I can show two shorter one. They are not very exciting, but are worth a look.

Beginning of the inscription: oṃ sayin amuγulang boltuγai, that is: “Om, let there be peace!” I cannot completely understand the continuation of the text.

Another inscription: qamuγ amitan burqan-u qutuγ olqu boltuγai, that is: “May every living being reach the holiness of the Buddha!” These two short examples attst that the cult of the place continued after the arrival of Buddhism. This is also documented by a large number of Tibetan graffitis on the rock.

Of course, the rock itself did not come here by itself, the legend says. Long time ago there lived a hero here called Bökebilig (“Strong and wise”). Suddenly a large snake started to come out from under the earth. Bökebilig did not like this, and he pushed back the snake from where it came, and then he closed the mouth of its cave with this rock which has been standing here ever since. Not far from the rock there is a small mountain called Altan sandali (“Golden throne”), of which tradition says that Bökebilig took a rest on it, while washing his hands in the nearby Tamir river. 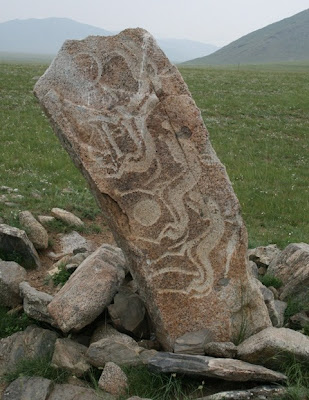 Once you’re here, check the nearby graves with a number of so-called “deer stones”. They indicate that there was no cultural continuity between the original people erecting the “deer stones” and the later one digging the graves, because the “deer stones” were simply used for building material.

As their name shows, “deer stones” were mostly decorated with deers, but on a grave near Altan sandali we could also find a very special stone with horses instead of deers. Fortunately, it has survived the centuries in an excellent condition. Here you are.

There are only a handful of “horse stones” around, while you can still see hundreds of “deer stones”. It is still a question why these stones were carved and erected. Perhaps we will resolve this mystery on a day, but one thing is sure: it is worth looking around in Mongolia!

I find this whole subject fascinating.  The rock itself doesn't look to me like a glacial erratic; perhaps some reader here can provide an opinion re its formation.  Regarding the history that it was used by a giant to crush a snake when the ground began to move in waves, I wonder if this part of the world is seismically active.

The petroglyphs are elaborate and beautiful; there are additional photos of them and of the ancient epigraphs at mongγol bičig & manju bithe.

A hat tip to "Studiolum" at  Poemas del rio Wang for locating this interesting item and providing the translation.