"Baseball" in the fourteenth century 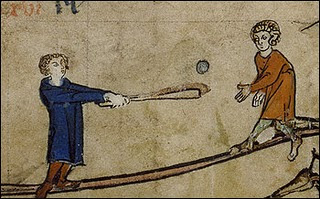 Now that the Minnesota Twins have re-enacted their own version of the personal Hell of "Groundhog Day," it's time to say goodbye to baseball, with material from a surprising source.

Got Medieval specializes in European Medieval history, with a recurring emphasis on the visual arts of the time and the marginalia inscribed on illuminated manuscripts.  This week he discussed the image shown above, "found in the margins of the calendar that was originally part of the Ghistelles Hours, a 14th-century Flemish book of hours..."  Herewith a brief summary:


Though there's no base in sight, various historians of sport have identified this game as a version of "stool ball" or "stump ball", which was baseball played with only one base, where the object was for the pitcher to hit a stump or a stool or other handy protrusion with the ball while the batter protected it by batting away the pitcher's balls...

We have no clue how the scoring might have worked, but apparently the game was co-ed and the sort of thing you'd play at an Easter festival.

For further discussion and a picture of medieval monkeys playing baseball (!!), see the link.