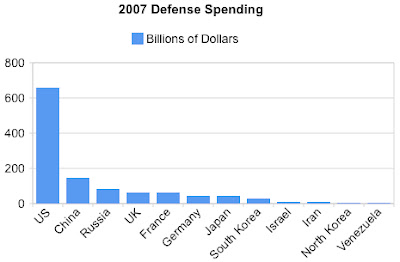 We'll defer for now any commentary, and just offer the numbers for consideration. The data source is here, via Yglesias -

I can’t vouch for the authenticity of the quote, but someone told me he heard a Chinese official tell him “over the past decade you’ve spent $1 trillion on Iraq and Afghanistan, we’ve spent $1 trillion building the future of China.” I don’t really think we should view that contrast in a paranoid light, but if you do want to take a paranoid view of the American national security situation it makes a lot more sense to worry about that than to worry that someone in a cave might build a bomb.

One commenter at the link suggested this list of aircraft carriers in the world:

At the Wiki link there are data re the relative sizes and ages of the carriers.