It's not nice to mess with Mother Nature 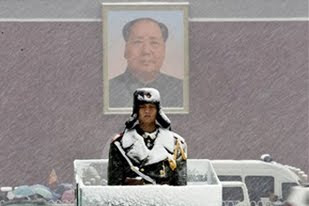 Last week China announced that it had successfully induced an early snowfall in the Beijing region, helping to counter a dry spell. More recent reports indicate that the precipitation has changed from delightful to menacing:

Scores of people have been killed in China due to heavy snows, some of which were artificially created. The dead included children crushed when the roof of their school canteen fell in under the weight of the snow.

Thousands of homes have also collapsed and half a million acres of crops have been blighted. According to the civil affairs ministry website most deaths had been caused in traffic accidents.

The snowfall is the heaviest... since record keeping began after the establishment of the Communist state in 1949, the ministry said.

Weather modification has long been a goal of scientists (and governments). Most of the concern has been on "downstream" effects (if you take the rain, someone else doesn't get it), but as this example shows, adjusting one's own weather seems to be at present an imprecise science.

Or, of course, it may be just a coincidence.