"An unhappy donkey has tape stuck to its coat in an attempt to transform it into a zebra. Due to Israeli blockades on the Gaza Strip, it has become impossible for a Palestinian zoo to import wild animals. So after the last two zebras died, the owner of the Marah Land Zoo painted and taped two donkeys into zebra lookalikes. The unfortunate creatures have become symbols of the blockade. It would cost over $40,000 (€26,600) to smuggle a genuine zebra from Africa, via Egypt, through secret tunnels built under the blockaded border. Whereas, the zookeeper told the Chinese Xinhua news agency, the donkeys only cost $700 (€470) each. Plus paint and masking tape, of course."

Text and photo from Der Spiegel. The masking tape is of course a temporary measure for the coloration process. The final product is shown below in a photo from the Huffington Post. 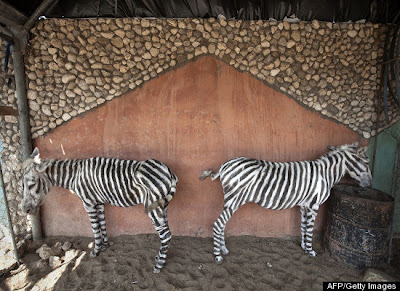 Those who consider this cruel should take a moment to reflect on the normal life of a donkey as a beast of burden, and should compare this treatment with what Americans do to dogs.