Every now and then someone points out to me that I'm posting something that "isn't new" - something that they saw on the internets years ago. The reason is that TYWKIWDBI is just under two years old, and lots of interesting stuff happened before we entered the cyberworld. I'm using the blog to store stuff I might want to see when I'm old(er) and (more) senile. And one of those things is the famous exploding whale - an event which occurred in 1970, reached YouTube in 2006, and Neatorama shortly thereafter.

Now this isn't the whale that spontaneously burst while being transported through Taiwan; that (low-res) video is here. The whale in the video embedded above was dynamited in an effort to expeditiously remove a carcass from a beach. Years later the reporter reminisced about the event: (Via Neatorama)

“We’re hearing this noise around us and we realize it is pieces of whale blubber hitting the ground around us (from) 1,000 yards away. A piece of blubber the size of a fingernail could kill you if it hit you in the right part of the head, so we ran away from the blast scene, down the dune and toward the parking lot. Then we heard a second explosion ahead of us, and we just kept going until we saw what it was: A car had been hit by this coffee-table-size piece of blubber and had its windows flattened all the way down to the seats.”

The news reporter doesn't explain where the whale on the beach came from; it's implied that it washed ashore. There are other possibilities... 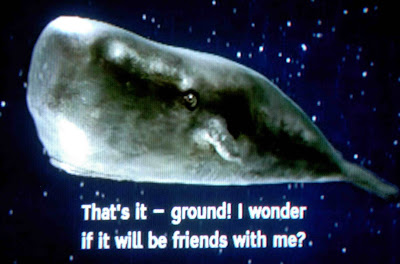 ...but no flowerpot was reported in the vicinity.