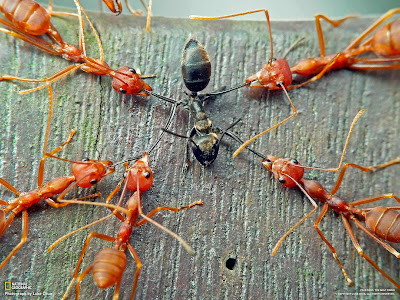 This photo from National Geographic shows a black ant in imminent danger of being dismembered, which brought to mind the phrase "drawn and quartered." To be "quartered" meant having the body itself divided into four parts - but what did "drawing" mean? For that I had to turn to Wikipedia:

There is debate among modern historians about whether "drawing" referred to the dragging to the place of execution or the disembowelling, but since two different words are used in the official documents detailing the trial of William Wallace ("detrahatur" for drawing as a method of transport, and "devaletur" for disembowelment), there is no doubt that the subjects of the punishment were disembowelled...

The Oxford English Dictionary notes both meanings of drawn: "To draw out the viscera or the like, to the place of execution". It states that "In many cases of executions it is uncertain [which of these senses of drawn] is meant. The presumption is that where drawn is mentioned after hanged, the sense is [the second meaning]."

Much more at the link (re the quartering, etc.) which we will leave "below the fold" for the sake of the squeamish.