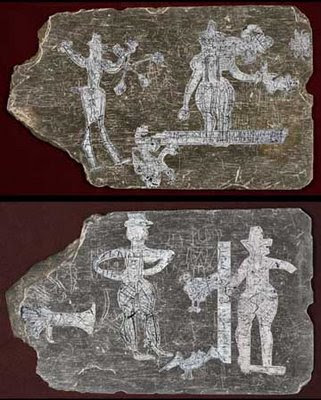 Archaeologists working at Jamestown, Virginia, have been excavating what they believe may be the first well dug at James Fort in 1609 by Captain John Smith. This summer they retrieved an unusual artifact from the well - a slate tablet inscribed on both sides with drawings of people, plants, birds, words, and numbers.

The words on the slate include the phrase "A MINON OF THE FINEST SORTE."

According to Straube, "minon" is a 17th-century variation of the word "minion" and has numerous meanings, including "servant," "follower," "comrade," "companion," "favorite," or someone dependent on a patron's favor. A minion is also a type of cannon—and archaeologists have found shot at the James Fort site that's the right size for a minion.

Above that phrase are the letters and numbers "EL NEV FSH HTLBMS 508" interspersed with symbols that have yet to be interpreted.

The images on the tablet are difficult to see, because they are the same dark gray color as the slate (presumably enhanced in the photo embedded above), and they overlap. The colonists would have written on the tablet with a small, rectangular pencil made of slate with a sharp point. This would have made a white mark—and fortunately for archaeologists today, it also left a scratch...

He hopes eventually to sort out the sequence of the images with the help of NASA, where scientists at the Langley Research Center are using a high-precision, three-dimensional imaging system similar to a CT scanner to help isolate the layers and provide a detailed analysis of the tablet.

That report was written up in National Geographic in June. I've not seen any followup report as to the interpretation of the unusual phrase.