Adapting "The English Patient" to the screen 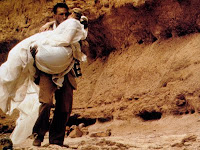 I had recently seen articles online about the possible discovery of the remains of Cambyses' lost army in the Sahara desert. While researching that for a blog post, I realized that this lost army had also been sought by Count László de Almásy, the burned man in The English Patient. I've seen the movie several times, but decided to read the book seeking references to Cambyses' army. There's very little - just some quotes from Herodotus re the "death of various armies."

But I did find an interesting discrepancy between the novel and the cinematic version. [Stop here if you don't want to encounter a "spoiler"] In the movie de Almásy/Fiennes returns to the Cave of Swimmers to find Katherine/Kristin Scott Thomas dead. How long she has been there is not clear (as best I can remember), but she looks quite lovely as he tearfully carries her to the plane. In the book her injury during the first plane crash occurs in 1939, but de Almásy's return is dealyed until 1942. One presumes that the director didn't want to depict Fiennes carrying a mummified corpse...

p.s. -for those interested, here is the Google Maps satellite view of the "Cave of Swimmers." Zoom out, and try to picture this cave being on the shore of a great lake or inland sea...

"In Tassili I have seen rock engravings from a time when the Sahara people hunted water horses from reed boats. In Wadi Sura I saw caves whose walls were coverd with paintings of swimmers. Here there had been a lake. I could draw its shape on a wall for them. I could lead them to its edge, six thousand yers ago.

Ask a mariner what is the oldest known sail, and he will describe a trapezoidal one hung from the mast of a reed boat that can be seen in rock drawings in Nubia. Pre-dynastic. Harpoons are still found in the desert..." (~p. 18-19)

It staggers the mind.