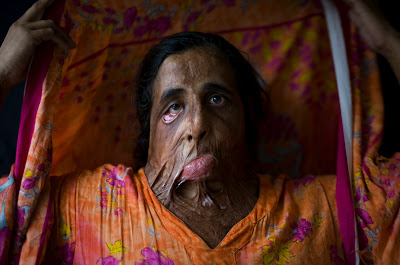 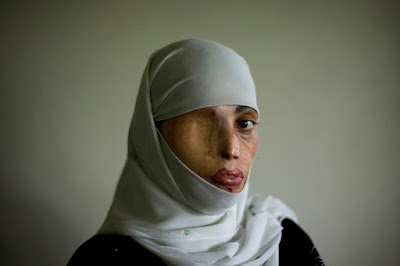 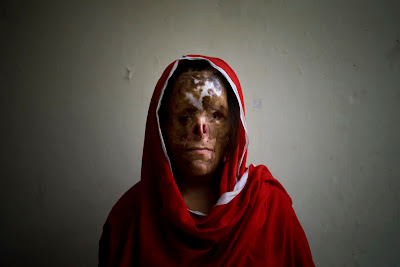 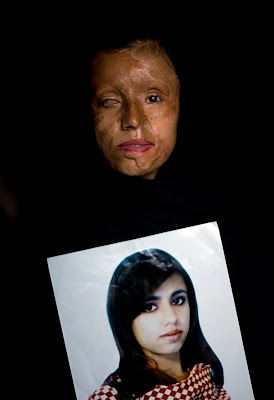 Most people are aware that in some cultural settings, women and girls are punished by having acid thrown in their face. Typically these stories circulate without photographs of the victims, perhaps in part because of the shame felt by the victim, but also because of hesitancy of the mainstream press to inflict such images on the public.

This week I found at the All Eyes blog at TampaBay.com an essay on the subject accompanied by a set of a dozen portraits, each accompanied by a brief biographical sketch. Here are some examples:

Irum was burned on her face, back and shoulders twelve years ago when a boy whom she rejected for marriage threw acid on her in the middle of the street. She has undergone plastic surgery 25 times...

Shameem was raped by three boys who then threw acid on her three years ago. Shameem has undergone plastic surgery 10 times...

At the age of five Najaf was burned by her father while she was sleeping, apparently because he didn't want to have another girl in the family. As a result of the burning Najaf became blind and after being abandoned by both her parents she now lives with relatives. She has undergone plastic surgery around 15 times...

Bushra was burned with acid thrown by her husband five years ago because she was trying to divorce him. She has undergone plastic surgery 25 times...

Menuna was burned by a group of boys who threw acid on her to settle a dispute between their family and Menuna's...

I found the Tampa Bay blog link in a Reddit thread, where this topic is discussed at length, and where there are links to several organizations which provide support to these women, and which accept donations: The Acid Survivors Trust International, The Cambodian Acid Survivors Charity, and the Acid Survivors Foundation, Pakistan.

I suppose there will be visitors to TYWKIWDBI who will be distressed to be confronted by these faces on arriving at the blog. I don't care. These women have been "below the fold" too long. It's hard for me to describe how high my respect is for the raw courage these women display, not only in pursuing their lives with such an enormous cosmetic defect, but in being willing to be photographed. I encourage you to view the other portraits and admire the quiet dignity of these women.