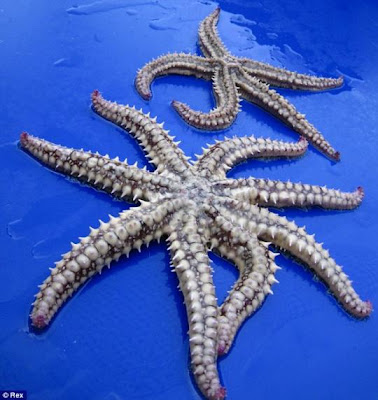 One would suspect that there aren't many echinoderms in the world that have names. This one has been named "Stan." He is extremely unusual because he has eight arms.

Stan, as he’s been named, was caught off the coast of Cornwall in a local fisherman’s crab pot and was promptly delivered to the Blue Reef Aquarium in Newquay for their opinion.

Following a thorough medical examination by a marine biologist from Plymouth, it was thought that Stan (as he’s now been named!)’ probably hadn’t just ‘regrown’ his arms but had in fact been born that way. A normal starfish has a central disc which is basically the equivalent of the human body - it has it’s ‘brain’, mouth, stomach, water pump … in essence it’s the the main core of it’s essential organs. But Stan is the equivalent of Siamese twins! He has two discs fused together in a figure of 8 shape.

More details at Scienceray, via Webphemera.