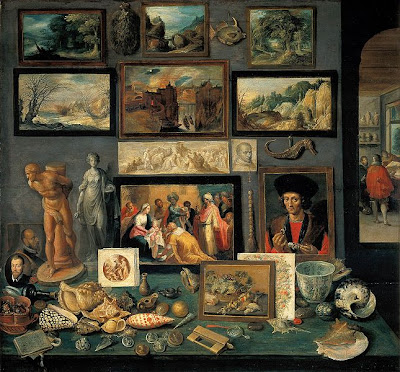 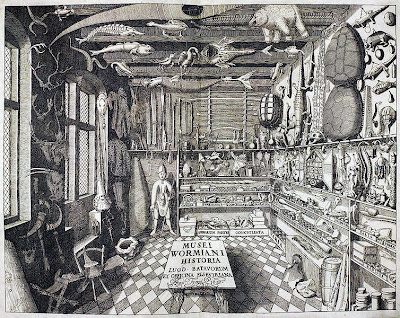 Cabinets of curiosities… were encyclopedic collections of types of objects whose categorical boundaries were, in Renaissance Europe, yet to be defined. Modern terminology would categorize the objects included as belonging to natural history (sometimes faked), geology, ethnography, archaeology, religious or historical relics, works of art (including cabinet paintings) and antiquities. "The Kunstkammer was regarded as a microcosm or theater of the world, and a memory theater…”

I particularly like the term "memory theater," because one of my stated purposes in creating the blog is as a place to store things I want to see again when my memory starts to fade.

The term cabinet originally described a room* rather than a piece of furniture... The juxtaposition of such disparate objects... encouraged comparisons, finding analogies and parallels... Several internet bloggers describe their sites as a wunderkammer, either because they are comprised primarily of links to things that are interesting, or because they inspire wonder in a similar manner to the original wunderkammer.