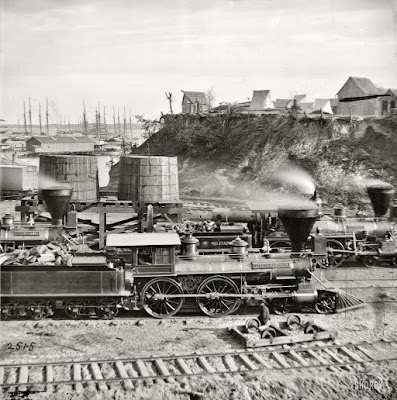 City Point, Virginia, circa 1865. "Gen. J.C. Robinson" and other locomotives of the U.S. Military Railroad. From views of the main Eastern theater of war, the siege of Petersburg, June 1864-April 1865.

Lots of interesting aspects to this old photo from Shorpy. If it interests you, explore the larger-than-fullscreen version. Some comments from the thread there:

The tents and buildings on top of the bluff were part of the Railroad Hospital. The wharf shown is a replacement for one that was blown up by saboteurs on August 9,1864. The explosion killed 43 laborers and according to Mr. Frassanito narrowly missed General Grant who was in front of his headquarters tent at the time.

...there would be about 200 vessels anchored off of City Point on any given day by the fall of 1864 including the ironclad ram "Atlanta" with one stack.

A turret of a Union ironclad can be seen in the background over the top of the pier-side warehouse. This could be the USS Onondaga, which was stationed at City Point to prevent Confederate ironclads from breaking out of the James River and attacking the supply base.