The torture-related death of a U.S. soldier

The death occurred years ago, but was discussed today in a column at Editor and Publisher:

Alyssa Peterson, 27, a Flagstaff, Ariz., native, served with C Company, 311th Military Intelligence BN, 101st Airborne. Peterson was an Arabic-speaking interrogator assigned to the prison at our air base in troubled Tal Afar in northwestern Iraq. According to official records, she died on Sept. 15, 2003, from a "non-hostile weapons discharge"...

According to the official report on her death released the following year, she had earlier been "reprimanded" for showing "empathy" for the prisoners. One of the most moving parts of that report is: "She said that she did not know how to be two people; she ... could not be one person in the cage and another outside the wire."

Peterson was then assigned to the base gate, where she monitored Iraqi guards, and sent to suicide prevention training. "But on the night of September 15th, 2003, Army investigators concluded she shot and killed herself with her service rifle," the documents disclose.

Peterson, a devout Mormon, had graduated from Flagstaff High School and earned a psychology degree from Northern Arizona University on a military scholarship. She was trained in interrogation techniques at Fort Huachuca in Arizona, and was sent to the Middle East in 2003.

This story reminds me of the photo I posted in January, which I entitled "Two Victims of War." It's worth reposting now as a reminder that even professional military personnel suffer in times of war... 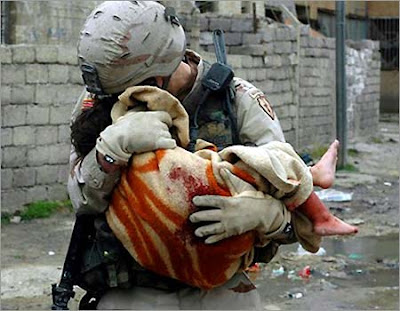