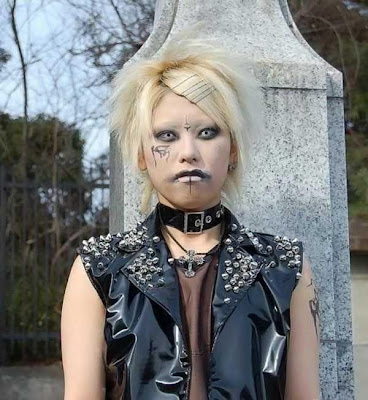 Since I "came of age" in the 1960s, I need to remind myself not to scoff or make fun of someone because of how they look. That said, I remain somewhat bewildered by this photo.

I've labelled the post "Goth" without frankly knowing for sure if this is Goth. Could it be a subtype of Goth, a faction, a sectarian splinter group? Someone reading TYWKIWDBI will probably know and can enlighten me/us. Perhaps it's even a parody of Goth (?)

I don't think it's 'shopped. For the longest time I thought that the unreal-looking pupils and sclerae of the eyes had that appearance because those features were painted onto the outside of the closed upper eyelid. (I've seen that before and blogged about extreme mascara last year). But, as Eric points out in the comments, it's probably special contact lenses.

I've also read somewhere that students who "go Goth" are as a group more intelligent than their schoolmates, and that parents shouldn't have knee-jerk reactions against the trend. Again, any insightful commentary would be appreciated.

(Found at a photo-aggregating site without attribution re source or photographer. No sources found with a TinEye reverse image search.)