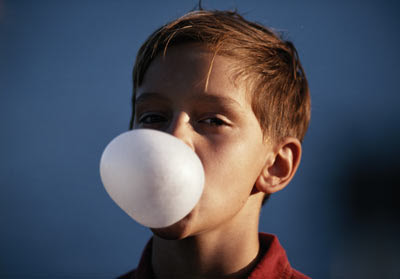 That's what you would conclude if you read CNN.com (I don't know if this has been broadcast), citing research funded by the Wrigley Science Institute:

Researchers at the Baylor College of Medicine took 108 eighth-grade math students from a Houston, Texas, charter school and divided them into two groups, following them for 14 weeks. One group chewed gum while doing homework and during test-taking situations. The other group did not chew gum at all.

The results were surprising. The gum-chewing students had a 3 percent increase in their standardized math test scores compared with those who did not chew gum. Also, the students who chewed gum had better final grades compared with the non-chompers.

"Chewing gum is an easy tool students can use for a potential academic edge," says Craig Johnston, Ph.D., the lead researcher and an instructor in nutrition at the Department of Pediatrics at Baylor College of Medicine.

Did I mention that the research was funded by the Wrigley Science Institute ? (their website is wrigleygumisgood.com).

I don't know how this study was done, but from previous experience in the research field I can offer one way to do it. A company conducts studies at 5 universities, funding researchers and paying participants. The data is collected. One study shows an improvement of 3%, another an improvement of 1%, another shows no change, another shows a decrease of 1%, and the fifth shows a decrease of 3%. At that point you publicize the first study and tell the other four "thank you for your participation; too bad your results didn't turn out better. We'll continue to analyse the results. Here's your money." The valid data, generated by ethical researchers at a prestigious university, is widely disseminated; the rest is deep-sixed.

That's not a proper goal for an objective scientist. A properly formulated objective is "We're studying whether consumers should chew," not "We're providing reasons why they should."

According to the American Dietetic Association, "If you chew two sticks of gum at 20 calories instead of eating one to two chocolate chip cookies at 140 calories, you can save 120 calories."

Why such a conservative comparison? One could honestly say that if you chew two sticks of gum at 20 calories instead of eating two megaburgers at 4800 calories, you can save 9560 calories.

Let me be clear: I'm not accusing Wrigley of improper conduct or bad science; the results may be valid. But I do not trust research funded by the beneficiary of positive results.