Geography of the Seven Deadly Sins 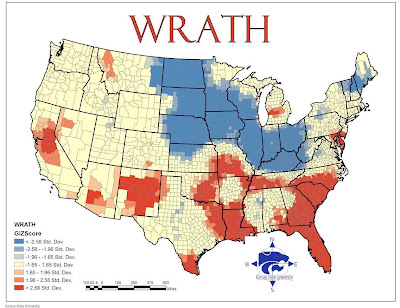 Obviously somewhat tongue-in-cheek, but still interesting. Not much wrath in my part of the country.

Wrath was calculated by comparing the total number of violent crimes — murder, assault and rape — reported to the FBI per capita.

Lust was calculated by compiling the number of sexually transmitted diseases — HIV, AIDS, syphilis, chlamydia and gonorrhea — reported per capita.

Gluttony was calculated by counting the number of fast food restaurants per capita...

Maps at the LasVegasSun, via Neatorama.