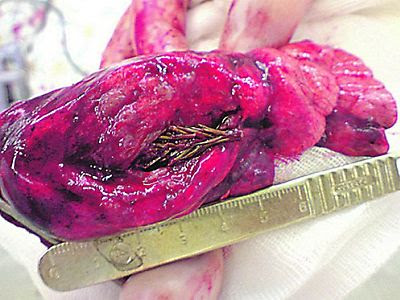 I can offer proof from the medical literature of the 1960s.

I first saw the story at Reddit, referencing mosnews.com, which claimed that a 5 cm fir tree was removed from the lung of a man who had complained of chest pain and hemoptysis. Xrays suggested a "tumor," but the resected specimen showed GREEN pine needles (photo above).

It is obvious that a five-centimeter branch is too large to be inhaled or swallowed, doctors say. They suggest that the patient might have inhaled a small bud, which then started to grow inside his body.

First of all, it is NOT too large to have been inhaled. Much larger items (railroad spikes!) have reached the bronchial tree. Secondly, a 5-cm fir tree sprout does not have a full inflorescence of needles like the specimen depicted. Thirdly, nothing growing in the darkness of the lungs would produce the green pigment of activated chlorophyll.

Finally, a phenomenon like this has been reported previously - with grass heads. See these references:

In the latter case what happened was that children were playing a game of "chicken" by placing grass heads on their tongue and saying "cheep." The mouth movement caused the spikes of the grass head to push the object backward. The last one to pull the grass head out won. In the case described, the grass head was aspirated. Once in the airways, the spikes of the grass prevented it being coughed out, and with each cough it was compressed and moved more distally, eventually presenting as a mass on the chest wall, where an incision was made and the grass head pulled out - quite intact, undigested, and ready for another game.

This claim of a tree growing in the lung is just a case of an aspirated tip from a fir or pine tree branch. It could have been aspirated during intoxication months previously and the incident not remembered.

The story has now been picked up by FOX News and by the Huffington Post.

But now you know how it really happened.

Addendum: There's now a video report on the BBC, which includes photos of the CT scan, confirming the peripheral, subpleural location of the pseudotumor created by the aspirated pine inflorescence: 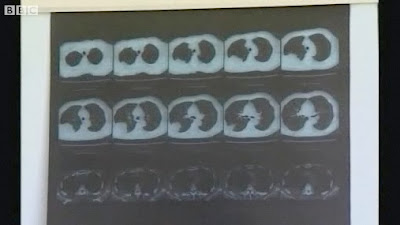 Second addendum: After the above story filtered through the web, some additional cases were reported from Sweden. In both cases the needle bunch had been conventionally aspirated:

18 years ago Pierre Akerblom was on a survival course in he forest, during which participants ate fresh spruce shoots because they are rich in vitamin C. He aspirated a shoot and was recurrently ill with pneumonias until 2004 when the material was retrieved via bronchoscopy.

Ingegerd Svahn Karlssons was 5 years old in 1958 and was playing when she choked on the pine needles. It remained there, causing illness x12, until removed by thoracotomy ten years later - at which time it was still green.