A mother kills her son at a shooting range 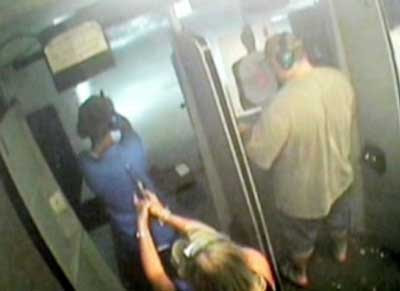 Blogged somewhat reluctantly, since I don't like to feature violence and insanity, but this is so bizarre that it deserves note.

A 44-year-old Florida woman went with her 20-year-old son to a shooting range. While he was firing, she took her revolver, aimed directly and intentionally at the back of his head, and killed him. She then placed the gun in her mouth and killed herself.

That this was no accident is evident from the recordings and written suicide notes she left behind:

"God made me a queen and I failed. I'm a fallen angel. He turned me into the anti-Christ."

"I have to die and go to Hell so there can be a thousand years of peace on Earth."

"I couldn't kill myself and leave Mitchell behind. I had to send my son to heaven and myself to Hell."

Screencap from Arbroath. Video available there and at MSNBC.