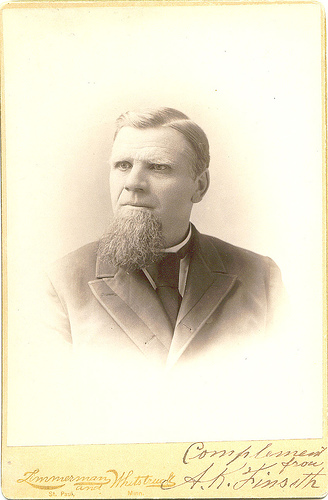 I browse Flickr each week; this week on a whim I typed in a family name, and lo and behold, was greeted by the bewhiskered visage of my great granduncle (my grandfather's uncle).

A.K. (Anders Knut) Finseth was Norwegian, from the Hemsedal/Hallingdal region of Norway, born in 1836. When he was 17 years old, he emigrated with his brother, O.K. Finseth, to the United States in 1853. They arrived in Wisconsin in 1854, then moved on to Goodhue County, in what at the time was the "Minnesota Territory."

These were pioneers in the truest sense of the word. The area wouldn't achieve statehood for another three years in 1858. A.K. Finseth eventually cleared and farmed over 300 acres, was elected to the Minnesota state senate in 1874 and was one of the presidential electors in 1876. His brother, Ole K. Finseth, was the father of my grandfather, Knut Olaus Finseth.

About a century later, another distant relative would become Governor of Minnesota - but that's another story...