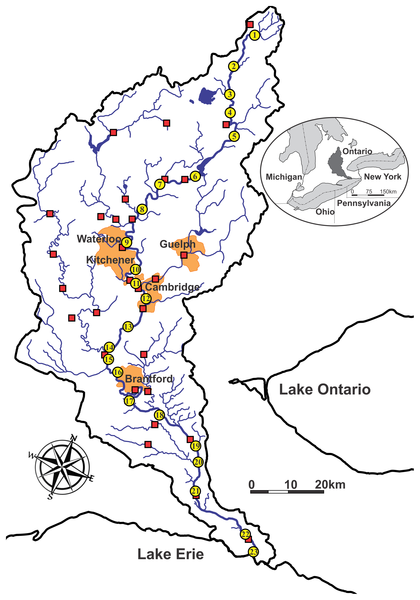 From the study published in PLoS One:

Artificial sweeteners have been widely incorporated in human food products for aid in weight loss regimes, dental health protection and dietary control of diabetes. Some of these widely used compounds can pass non-degraded through wastewater treatment systems...

In order to determine the riverine concentrations of artificial sweeteners and their usefulness as a tracer of wastewater at the scale of an entire watershed, we analyzed samples from 23 sites along the entire length of the Grand River, a large river in Southern Ontario, Canada, that is impacted by agricultural activities and urban centres. Municipal water from household taps was also sampled from several cities within the Grand River Watershed. Cyclamate, saccharin, sucralose, and acesulfame were found in elevated concentrations despite high rates of biological activity, large daily cycles in dissolved oxygen and shallow river depth. The maximum concentrations that we measured for sucralose (21 µg/L), cyclamate (0.88 µg/L), and saccharin (7.2 µg/L) are the highest reported concentrations of these compounds in surface waters to date anywhere in the world....

The effects of artificial sweeteners on aquatic biota in rivers and in the downstream Great Lakes are largely unknown.

The top image shows the sampling sites.  The graph below demonstrates that the aquatic concentrations corrrelate with the size of the human population upstream from the sample sites: 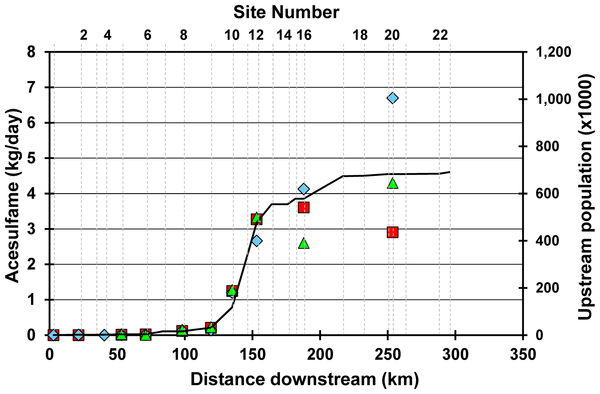