Why cover the border wall with razor wire?

Nothing about Trump's border wall makes sense to me, but this recent photo offered a new conundrum.  The United States side of the wall here is covered with an insane amount of razor wire.  I can understand that this shows Americans viewing the wall that "we are very very badass," but I don't see how this component adds to security.  A healthy young person reaching the top could just jump past the wire, or let down a 20-foot segment of hallway carpet and then slide to the bottom.  It looks like security theater to me.
Photo credit Alejandro Prieto, from the World Press photo contest.
Addendum:  Thanks for all the comments.  I didn't realize that this razor wire is also being deployed in urban areas such as Nogales - 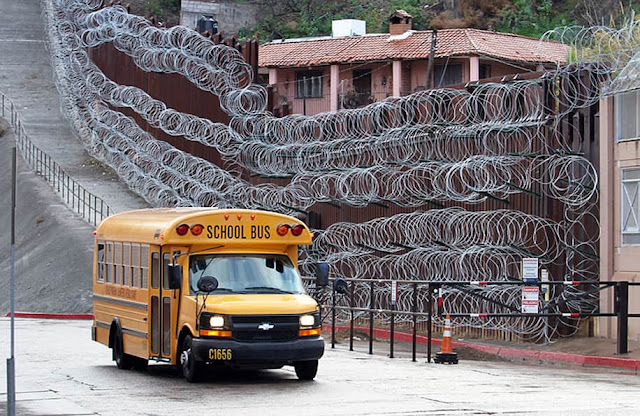 - where having it at ground level is considered by local authorities to be a health and safety hazard.
2022 addendum:

Smugglers have breached the Trump administration’s border wall along the US-Mexico frontier more than 3,000 times, government maintenance records obtained by the Washington Post reveal...
Part of the border wall is constructed using posts cemented in concrete at the base which support a long lintel at the top. Smugglers are easily able to saw through the posts and swing them open, then continue using the same breach until the damage is detected by the border patrol... Smuggling organizations have sawn large enough holes to pass an SUV through.