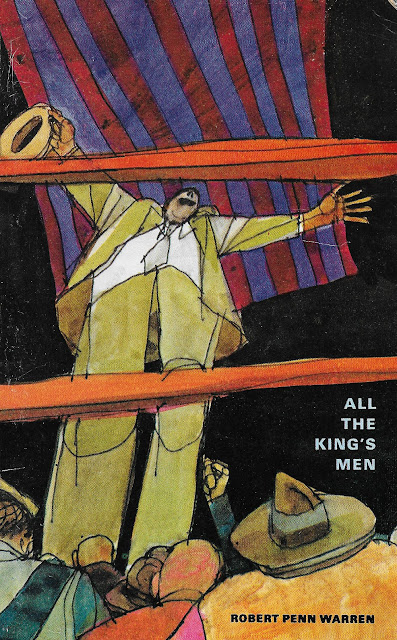 Just finished my third and presumably final reading of this classic work.  I first encountered it as a student, then again as a young adult, after which I placed it on a bookshelf to "read again someday" - which day has arrived.
There are innumerable reasons to reread a book, but reading something three times suggests that one's motive is more than just plot and storyline.  For me, it's typically language - encountering a story that is told so well that you just want the storyteller to give it another go.  Robert Penn Warren is an accomplished craftsman with an excellent ear for dialogue, and actually a Pulitzer prize winner for poetry (twice) as well as for fiction (for this novel) (and the only person ever to have won both those Pulitzers).  I'll offer here some excerpted passages from the book [bold font added]:

And finally a few words and usages that were new to me, some classic and others regional or colloquial:

"Tom Stark prodded the dog with his toe for a little encouragement, but he might just as well have been prodding a bolster."  In context, a large pillow, unchanged from Old English, and cognate with German and Scandinavian words.
"Jesus," the Boss said, "put the old white thunder-mug under the bed and it'll look just like home."  Interesting (and evocative) term for a chamberpot.
"When you get born your father and mother lost something out of themselves, and they are going to bust a hame trying to get it back..."  Found the answer at Mental Floss: "To bust a hame string—where hame string is an alteration of hamstring—means “to make a sudden great effort,” with a transferred meaning of “to become excessively angry.” "
"... give him a tin scimitar like he was a High Grand Shriner or something, and he can sit on a tuffet outside your door and be Secretary of the Bedchamber."  Apparently Miss Muffett's tuffet was a clump of grass, but this one would be a cushion, with or without an internal frame.
"I could have slapped that God-damned handsome, eagle-beaked, strong-boned rubiginous-hided, high old face, in which the eyes weren't old but were hard and bright without any depth to them and were an insult to look into."  More commonly rubiginose "having the color or appearance of iron rust" (Latin etymology).
"He was just another fellow made in God's image and wearing a white shirt with a ready-tied black bow tie and jean pants held up with web galluses.  Town from the waist up, country from the waist down.  Get both votes."  Suspenders for trousers.  Apparently arose as a variant of "gallows" for hanging something, not from the Latin gallus = goose.
"Those folks in the shacks were in such a shape they'd be ready to walk fifteen miles for a bait of fresh."  (I have no idea on this one)
"What the hell do you want to go to that barbecue for?" I said.  "I'm going to tell 'em to hist tail."  I'm going to assume a regional pronunciation of "hoist" tail = to depart.
"... those gully-washed red-clay roads to walk over - or to break his wagon axle or string-halt his mules on."  A term in veterinary pathology referring to a disorder or the motor nerves in horses.  Dressage Today has details.
"... with his high old red-thatched head bent over, the yellow eyes gimleted upon the task."  As a verb it carries the meaning of "to pierce."
"There was what I took to be George, in one corner of the big, sparsely furnished room, sitting tailor-fashion on a piece of old blanket..."  Cross-legged -  typically on top of a table. There is enough interesting information at Blue Anchor Corner to fill a separate blog post when I have time...

"... whatever the hell it was or whyever the hell he lived that way..."  A perfectly valid word, but the first time I've ever seen it.  I have certainly encountered "why ever would xyz..." but never as a single compound word.
"He made up what he needed to do business, Doc.  And what he made up and got everybody to mirate on as good and right was always just a couple of jumps behind what he needed to do business on."  To "marvel at" - from the Latin.
"Little girls wear white dresses with skirts that flare out to show their funny little knees, and they wear round-toed black patent-leather slippers held by a one-button strap, and their white socks are held up by a dab of soap, and their hair hangs down the back in a braid with a blue ribbon on it.  That was Anne Stanton..."  I was never a young girl, so someone clue me in.  Did girls of this era (1930s-ish) use soap to help white socks stay up?  How would that work?
"... the pussel-gutted city cops sweating in their blue..."  "When asked about the meaning of pussel-gutted at the University of Virginia in 1957. Faulkner replied: "I've heard it all my life. It means someone that is bloated. that has a tremendous belly that he shouldn't have."  The Mississippi Library Commission says "Pussel-gut means to fatten. "The old witch gave Hansel and Gretel all sorts of good food with which to pussel-gut themselves."  Etymology???
"... I turned off the highway twenty-five miles out of the city and tooled gently up the drive under the magnificent groining of the century-old live oaks whose boughs met above the avenue and dripped stalactites of moss..."  In architectural terms, the meeting of two vaults.

And after enjoying this book, I think I should re-read his Brother to Dragons.