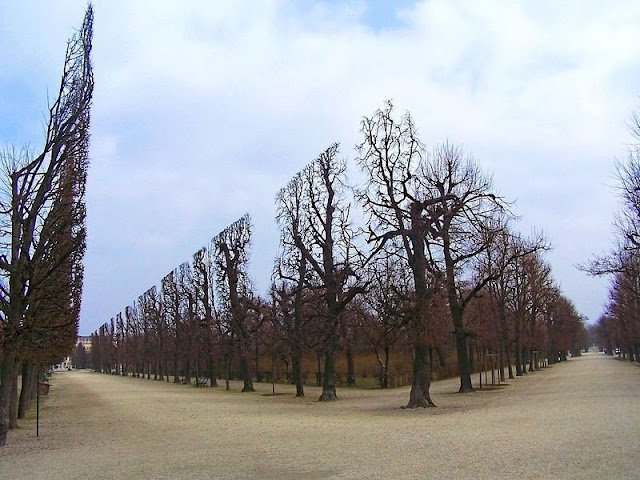 Pleaching or plashing is a technique of interweaving living and dead branches through a hedge for stock control. Trees are planted in lines, the branches are woven together to strengthen and fill any weak spots until the hedge thickens. Branches in close contact may grow together, due to a natural phenomenon called inosculation, a natural graft. Pleach also means weaving of thin, whippy stems of trees to form a basketry effect.

The photo, via the WoahDude subreddit, was taken at the Schönbrunn Palace gardens.

For me the image immediately conjured up memories of the scene in The Third Man where Anna walks out of Holly's life, but that one was taken at a Viennese cemetery.

This photo, and the watermarked one here, show the equipment used at the palace to accomplish the effect: 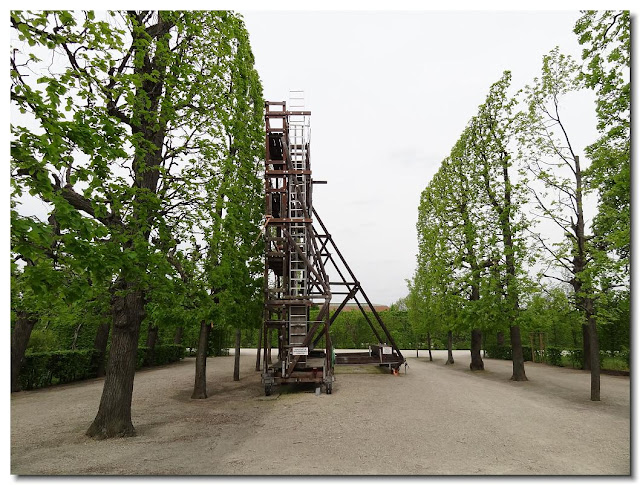 Although the top photo was described in the discussion thread as an example of pleaching, a review of Google Images retrieved by keyword pleaching suggests that the process at the palace is just elaborate pruning, without the interweaving indicated by the term "pleaching."

Still an interesting effect, though.

Reposted from 2017 to add this photo of naturally-occuring inosculation: 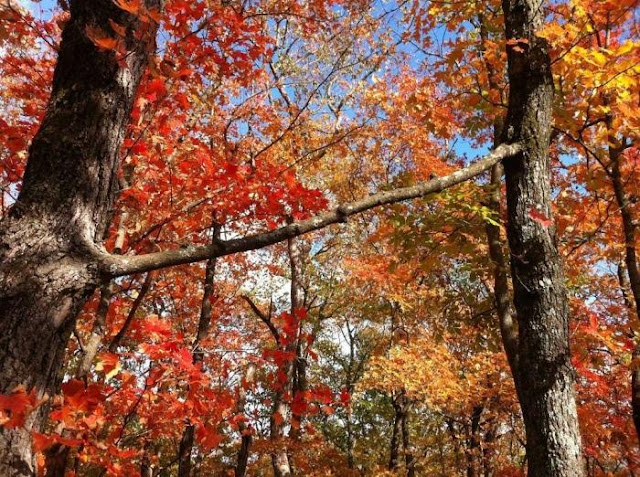 Wordsmiths will recognize the term as being related to "kissing" -


Inosculation is a natural phenomenon in which trunks, branches or roots of two trees grow together. It is biologically similar to grafting and such trees are referred to in forestry as gemels, from the Latin word meaning "a pair".

It is most common for branches of two trees of the same species to grow together, though inosculation may be noted across related species. The branches first grow separately in proximity to each other until they touch. At this point, the bark on the touching surfaces is gradually abraded away as the trees move in the wind. Once the cambium of two trees touches, they sometimes self-graft and grow together as they expand in diameter. Inosculation customarily results when tree limbs are braided or pleached.

The term "inosculation" is also used in the context of plastic surgery, as one of the three mechanisms by which skin grafts take at the host site. Blood vessels from the recipient site are believed to connect with those of the graft in order to restore vascularity.

Reposted from last year to add this remarkable photo: 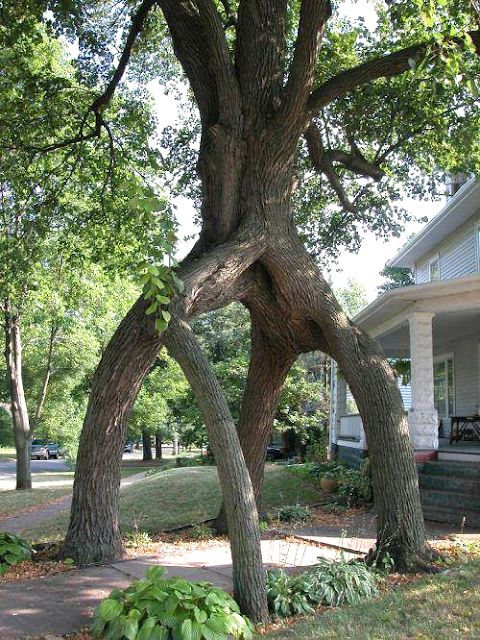 The tree, located in Cedar Falls, Iowa was created by a local resident by grafting four saplings together in 1915.  It has subsequently been damaged by a storm, but the "legs" have been preserved.
For other examples of modern tree shaping, visit the website of Pooktre Tree Shapers.
One final thought: to help remember the term "pleach," its etymology derives ultimately from the Latin word plexus (“braided, plaited, woven; bent, twisted”).