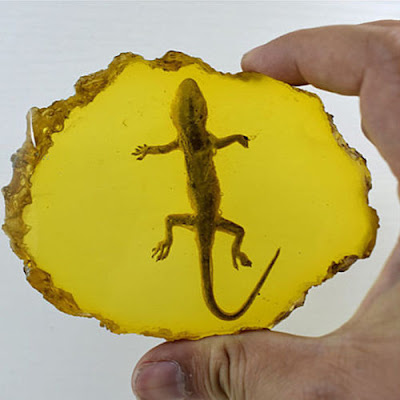 When you see a gecko embedded in "amber" for sale on eBay for 10 bucks, you have to figure the "amber" is fake (hornets, scorpions, butterfly specimens similarly priced at the link).  The item's description says "Manufacture: China, Chinese Factory Homegrown products for Sales", so that's probably a "disclosure," and the "amber" in the title can be defended as a color rather than a natural product.

This one is crudely done, but there are some remarkably good ones out there, as explained at Amber Pieces:


This industry dates back to the early 1900s, having its major source in New Zealand, where large amounts of Kaori Gum are located - the prime ingredient in the fabrication of fake amber. In the North Island, diggings of Kaori Gum would be performed daily, turning it into a major industry. It may be hard to imagine, but even the workers were so engaged in their activities that they formed their own newspaper called “The Gum Diggers Gazette”. If you wonder how this Kaori Gum was used as a surrogate for real amber, here is how it was done: the material would be melted down gently and carefully. Inclusions would then be placed into it, e.g. suitably colored insects which can easily be detected as fake fossils because true ancient amber fossils are colorless and monotone due to time usage..modern imitations are so close to perfection that simple analytical methods fail to differentiate between real amber and fake amber. Scientists developed the so-called FT-IR Spectroscopy test for the infallible identification of Baltic amber – succinite. Under close examination, real amber reveals its Baltic curve in spectrum coupled with gas chromatography and electron microscopic features...

Baltic Essentials offers tips on how to spot fake amber:


You can easily rub amber with your hands or with a cloth to produce heat as well to see if it emits a tree resin smell.  There will also be an oily residue that appears on your hands after several seconds of rubbing very fast.

Real amber also has an electrostatic charge, and when rubbed it will attract to things like your clothes, hair, or dust.

In salt water, genuine amber will float while most fakes, which are denser in weight, will sink.