Ever wonder how multi-lane highways are snowplowed? 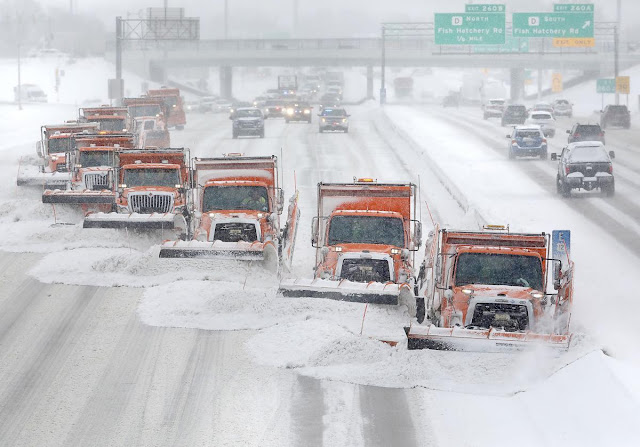 The process is nicely illustrated in this photo posted today in the Wisconsin State Journal.  It requires large, powerful trucks of course, but also an impressive degree of coordinated teamwork.  The difficulty arises because of an impenetrable concrete barrier separating the two directions of traffic (placed there to prevent catastrophic cross-overs).

Notice in the photo above that the trucks on the left of the photo are driving in previously-plowed lanes (as shown for the traffic going the other way).  Those central and outer lanes are done first, and then the entire team has to assemble in order to clear the snow from the innermost one.

Quite remarkable.  These snow-removal truck drivers are winter heroes here in the Midwest (even if they do sometimes leave huge solidified masses of frozen snow where your driveway meets the road...).