Even if you're not normally interested in elections, this 2-minute video is worth viewing, because it may be representative of a major shift in U.S. politics.

In the New York Democratic primary election yesterday, Alexandria Ocasio-Cortez beat the incumbent Joe Crowley - by 15 percentage points.  The contrast between the candidates couldn't have been greater.  He has been a major figure in the current Democratic party for almost 20 years - fourth in seniority in the House of Representatives, and considered the likely replacement to Nancy Pelosi as House Speaker.

She is 28 years old, female, of Puerto Rican descent, with a working-class background, and is an advocate of socialist principles, such as Medicare for all.  She refused any corporate funding, relying only on small donations, and accumulated only $600,000 exclusively from small-dollar donors, versus Joe Crowley's $3,000,000.

She is considered by many to be representative of the future of the Democratic Party.

Ocasio-Cortez ran decidedly to the left of Crowley, but she also shook up how Democrats go about getting elected. Until now, Democrats have seen big money in politics as simply a deal with the devil that had to be made. Democrats are so often outspent by Republican mega-donors that they viewed courting big-dollar donors and corporations as part of creating a level playing field.

But if one of Democrats’ top fundraisers and likely successor to Nancy Pelosi can be toppled, perhaps Democrats need to rethink that deal.

She will easily sweep to victory in November over any Republican challenger; that result will have no effect on the national balance, because this district voted heavily for Hilary Clinton in the last election.  (Donald Trump's claim that Crowley lost of Ocasio-Cortez because Crowley was a "Trump-hater" is of course pure bullshit).

A seasoned CNN political analyst opined today that "The Democratic base is sick of the establishment."

One last observation regarding the often-talked-about "Blue Wave."  It's not certain that the Democrats will make major gains in the November mid-terms, but it is clear that a "blue wave" is already sweeping inside the Democratic Party.  Look at this graph from the Washington Post: 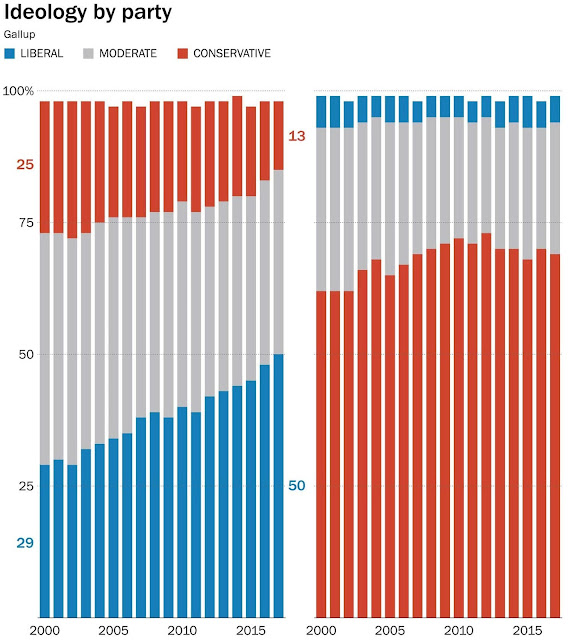 For eighteen years, the Republican Party has remained ideologically stable - about 2/3 conservative and about 10% liberal.  The Democratic Party has become steadily more liberal - from 29% to 50%  It's hard to believe that as recently as 2000, there were as many conservative Democrats as liberal ones.

Most of the Democrats who win primaries and then win election in November will not be as progressive as Ocasio-Cortez. Should the Democrats surge to victory, the new Congress will not be one in which Democratic Socialists are swarming the halls of power. But it will certainly be a more progressive Democratic caucus than the one that’s there or, probably, any in the last century.

If you read this without viewing the video, I encourage you to scroll up and spend 2 minutes watching it at full-screen.  I think it will become a template for a surge of similar campaign videos this fall.  And it cost only $10,000 to produce (she wrote the script for it, BTW).

Reposted from June 2018 to add the following from Axios: 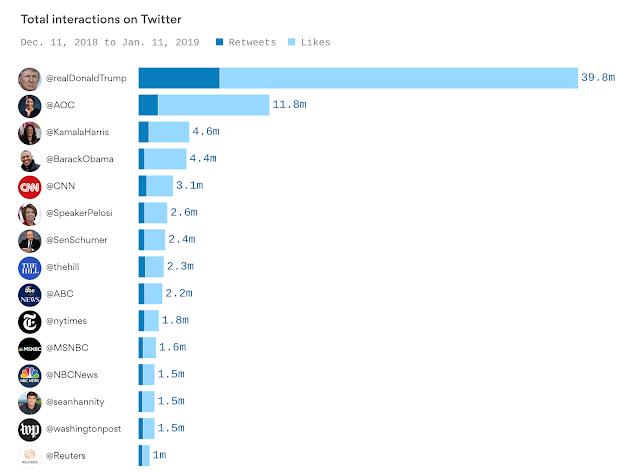 "A freshman congresswoman who has held office for less than two weeks is dominating the Democratic conversation on Twitter, generating more interactions — retweets plus likes — than the five most prolific news organizations combined over the last 30 days... And she has far more power on Twitter than the most prominent Democrats, including the congressional leaders and the likely 2020 presidential candidates..."

If (like me) you are not on Twitter, you can still monitor their tweets: Alexandria Ocasio-Cortez  Donald Trump (and others via the "You may also like" links in their left sidebars).