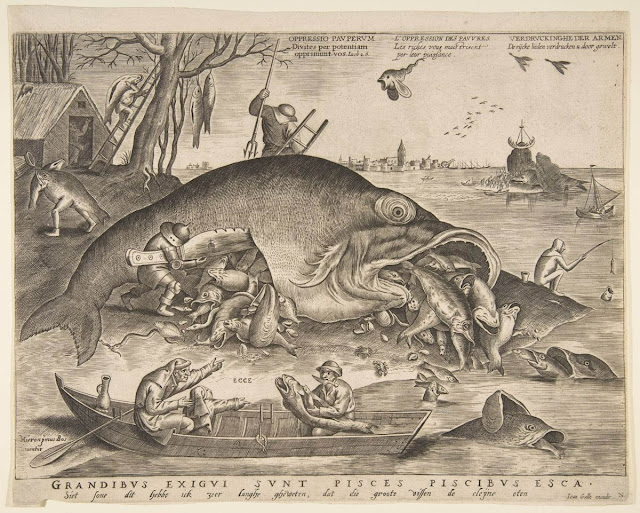 A report in Time asserts that "worldwide wealth inequality is out of control."

While the poorest half of humanity saw their wealth dwindle by 11%, billionaires’ riches increased by 12%. The mega-wealthy have also become a more concentrated bunch. Last year, the top 26 wealthiest people owned $1.4 trillion, or as much as the 3.8 billion poorest people. The year before, it was the top 43 people.

The drawing above is by Peter Bruegel the Elder.  It is discussed in detail at Poemas del rio Wang:


The landscape apparently was created to be a worthy frame for the matchless prey, the Great Fish, which is being cut open by a Liliputian man with a knife far greater than himself. From the stomach and mouth of the Fish, as if the blade of the knife also cut its throat, big fish-matrioshki are pouring out, those that had been swallowed by the Fish, and which immediately before that, or already in its stomach, tried to swallow further fishes. The pieces of the prey falling into the sea are awaited and immediately swallowed by other fishes, as by the seals on the fish market, and there is even a fish that come flying in for its share. The paroxysm of this gobbling frenzy grew to the point that even the mussels try to swallow fishes, even though they would think twice at this in their natural habitat. At the bottom of the picture, in a fishing boat, an oarsman points to the spectacle to his son: ECCE, and in the Flemish-language Italic inscription at the very bottom he shares with him the basic experience of his life: Look, my son, I have known for a long time that big fish eat small fish. The same is said by the Latin legend, in hexameter: “GRANDIBUS EXIGUI SUNT PISCES PISCIBUS ESCA” – small fishes serve as food for big fishes. And a much later version of this 1557 print, published by Jan Galle, active in Antwerp between 1620 and 1670, who even adds a trilingual explanation over the image, so that nobody can misunderstand the metaphor: “OPPRESSION OF THE POOR. The rich suppress you with their power. Letter of James, 2:6.”

Lots more at that link.  And we'll close with this detail from Bosch's The Temptation of St. Anthony: 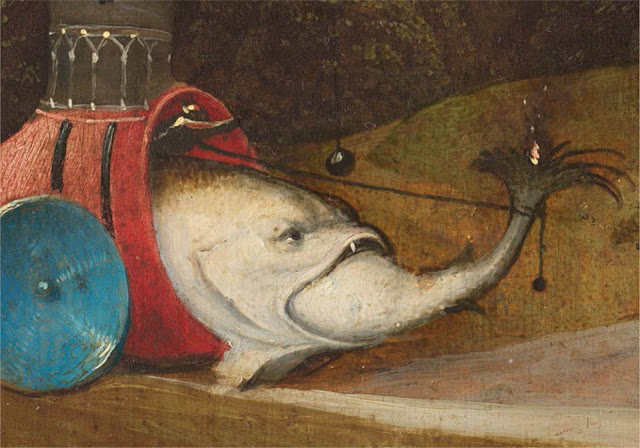