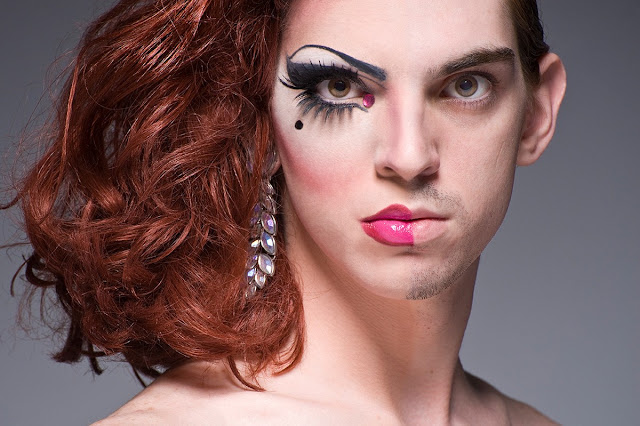 From a photoessay at Vantage:


The premise of Half Drag is simple. Photographer Leland Bobbé’s striking, gender-bending photo series captures New York City drag queens with half of their faces done up in full regalia, the other half au naturel. The result, achieved without any digital effects, is a collection of portraits that put the visual iconography of gender into striking juxtaposition...

... Bobbé suggests holding up a card (or just your hand) to cover one side of each image at a time. The contrast is startling. “People have told me that the male sides in these photos seem vulnerable, the female side with the makeup and jewelry are so powerful,” he says...


The models he photographed came into the studio wearing regular clothes, with several days of facial growth. They then shaved half their faces, and prepared their own hair and makeup. The hair proved to be the hardest part of the process.

“One came in and cut the wig down the middle,” Bobbé says. “Stray hairs would get over to the male side, that’s why the images are all cropped into the forehead, on top of the head are a lot of pins holding everything in place.”

More discussion and portraits at the link.