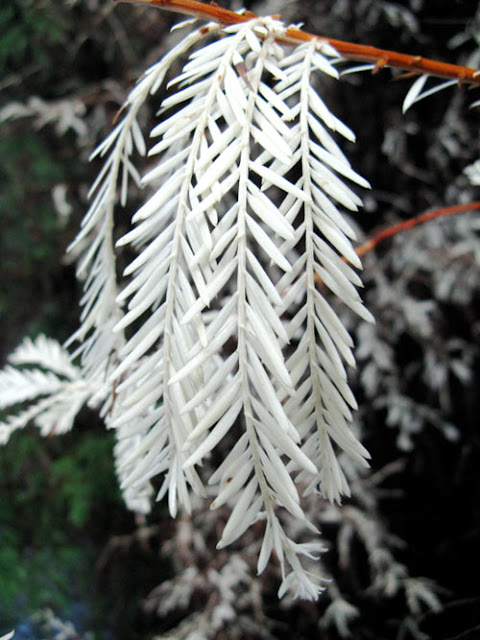 I didn't know they existed, until I read a story at NPR...


Park rangers in the Northern California Redwood Forest are protecting a decades-old secret. Actually, eight of them: Albino redwood trees...

Kuty points to a white bush. It's about six feet tall and it's sprouted from the base of a normal redwood tree.

STANDEN: Until you get up close. Albino redwood trees lack chlorophyll. Their needles are limp and waxy. They're the exact color of a glow-in-the-dark star you might find in a kid's bedroom. And while no one really knows for sure, albino redwood trees may be extremely rare.

Mr. KUTY How rare? Some people say there's 25 in the world.

STANDEN: And yet, eight of them live here. This park has the largest known concentration of albino redwoods anywhere, and that makes it the epicenter for a scientific mystery...

Without chlorophyll, they can't photosynthesize, meaning they can't convert sunlight into energy. The only reason that albino redwoods survive at all is that they are connected at the root to a parent tree from which they will suck energy for their entire lives...

Via Kottke (whence the photo).

Reposted from 2010 to add this photo from The Soul is Bone: 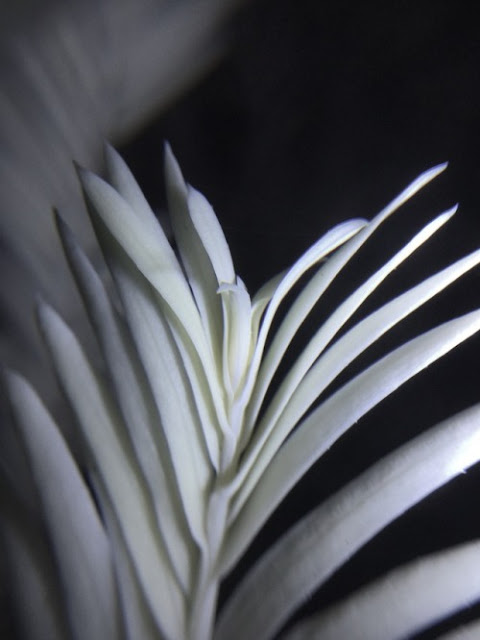 And this Wikipedia link.


"Other conifers lack the ability to graft their roots, so 'albino' mutants of other species do not survive to become sizable trees."

So I had to look up natural grafting:


"Tree branches and more often roots of the same species will sometimes naturally graft; this is called inosculation. The bark of the tree may be stripped away when the roots make physical contact with each other, exposing the vascular cambium and allowing the roots to graft together. A group of trees can share water and mineral nutrients via root grafts, which may be advantageous to weaker trees, and may also form a larger rootmass as an adaptation to promote fire resistance and regeneration as exemplified by the California black oak (Quercus kelloggii). Additionally, grafting may protect the group from wind damages as a result of the increased mechanical stability provided by the grafting. Albino redwoods use root grafting as a form of plant parasitism of normal redwoods."

And finally this webpage for Chimera Redwoods (more cool pix).