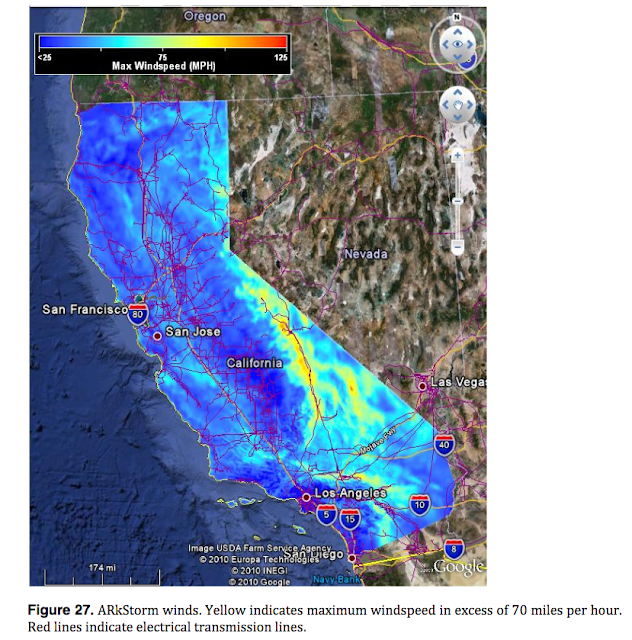 Residents of the west coast might want to download and/or browse a publication by the U.S. Geological Survey detailing the possible complications of a catastrophic weather event designated as ARkStorm.


This document summarizes the next major public project for MHDP, a winter storm scenario called ARkStorm (for Atmospheric River 1,000). Experts have designed a large, scientifically realistic meteorological event followed by an examination of the secondary hazards (for example, landslides and flooding), physical damages to the built environment, and social and economic consequences. The hypothetical storm depicted here would strike the U.S. West Coast and be similar to the intense California winter storms of 1861 and 1862 that left the central valley of California impassible. The storm is estimated to produce precipitation that in many places exceeds levels only experienced on average once every 500 to 1,000 years.

Extensive flooding results. In many cases flooding overwhelms the state’s flood-protection system, which is typically designed to resist 100- to 200-year runoffs. The Central Valley experiences hypothetical flooding 300 miles long and 20 or more miles wide. Serious flooding also occurs in Orange County, Los Angeles County, San Diego, the San Francisco Bay area, and other coastal communities. Windspeeds in some places reach 125 miles per hour, hurricane-force winds. Across wider areas of the state, winds reach 60 miles per hour. Hundreds of landslides damage roads, highways, and homes. Property damage exceeds $300 billion, most from flooding. Demand surge (an increase in labor rates and other repair costs after major natural disasters) could increase property losses by 20 percent. Agricultural losses and other costs to repair lifelines, dewater (drain) flooded islands, and repair damage from landslides, brings the total direct property loss to nearly $400 billion, of which $20 to $30 billion would be recoverable through public and commercial insurance. Power, water, sewer, and other lifelines experience damage that takes weeks or months to restore. Flooding evacuation could involve 1.5 million residents in the inland region and delta counties. Business interruption costs reach $325 billion in addition to the $400 billion property repair costs, meaning that an ARkStorm could cost on the order of $725 billion, which is nearly 3 times the loss deemed to be realistic by the ShakeOut authors for a severe southern California earthquake, an event with roughly the same annual occurrence probability.