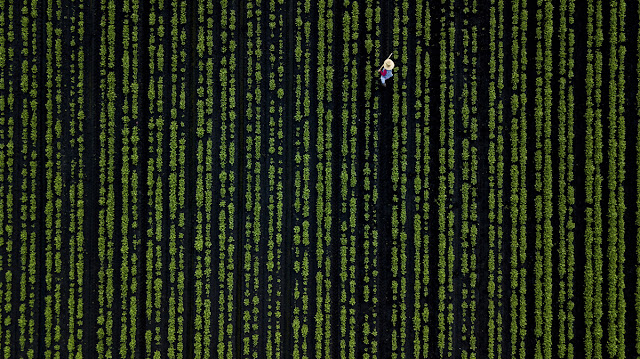 During a picnic lunch at a friend's farm, mention was made of a neighbor of theirs who operated a "muck farm."  I had previously only heard the term used with regard to cleaning out a stable, so I had to learn more about muck:


In the terminology of North American agriculture, muck is a soil made up primarily of humus from drained swampland. It is known as black soil in The Fens of eastern England, where it was originally mainly fen and bog. It is used there, as in the United States, for growing specialty crops such as onions, carrots, celery, and potatoes...

Muck farming on drained bogs is an important part of agriculture in New York, Ohio, Illinois, Indiana, Michigan, Wisconsin, and Florida, where mostly vegetables are grown. American "muckers" often have roots from the Netherlands or Eastern Europe, where their ancestors practiced a similar type of farming. The soils are deep, dark colored, and friable, often underlain by marl, or marly clay...

Muck farming is controversial, because the drainage of wetlands destroys wildlife habitats and results in a variety of environmental problems. It is unlikely that any more will be created in the United States, because of environmental regulations. It is prone to problems, such as being very light and usually windbreaks must be provided to keep it from blowing away when dry. It also can catch fire and burn underground for months. Oxidation also removes a portion of the soil each year, so it becomes progressively shallower. Some muck land has been reclaimed for wildlife preserves.

And here's the etymology:

Apparently the distinction from peat is based on the level of decomposition: peat = slightly decomposed organic material, vs. muck = highly decomposed.

Reposted from 2015 to insert the photo from this year's National Geographic Nature Photographer of the Year competition (via a gallery in The Atlantic).  Credit: Joost Boerman.