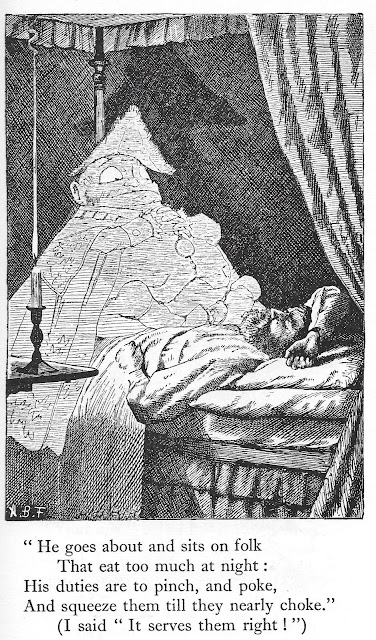 This past week I've been reading The Humorous Verse of Lewis Carroll (Dover, 1933), where I found the following in Canto V of Phantasmagoria:


"Who's the Knight-Mayor?" I cried.  Instead
of answering my question,
"Well, if you don't know that," he said,
"Either you never go to bed,
Or you've a grand digestion!"

The following verse is above, under the illustration by Arthur B. Frost.  I shouldn't need to point out that "Knight-Mayor" is a pun on "nightmare."

The phenomenon is also alluded to in this early poem by Carroll:

Horrors
(from The Rectory Magazine, 1850)

Methought I walked a dismal place
Dim horrors all around;
The air was thick with many a face,
And black as night the ground.

I saw a monster come with speed,
Its face of grimmliest green,
On human beings used to feed,
Most dreadful to be seen.

I could not speak, I could not fly,
I fell down in that place,
I saw the monster's horrid eye
Come leering in my face!

Amidst my scarcely-stifled groans,
Amidst my moanings deep,
I heard a voice,"Wake! Mr. Jones,
You're screaming in your sleep!"

I won't review the entire book, which I am not adding to the blog category of recommended books (because it's exhaustively comprehensive rather than selective), but I will excerpt a few tidbits:

Tare is familiar to anyone who has worked a balance in a chemistry lab.  Tret is related:


Tare and Tret, commercial terms, are deductions usually made from the gross weight of goods. Tare is the weight of the case or covering, box, or such-like, containing the goods; deducting this the net weight is left. Tret is a further allowance (not now so commonly deducted) made at the rate of 4 lb. for every 104 lb. for waste through dust, sand, etc.


Sadly, sadly he crossed the floor
And tirlëd at the pin:
Sadly went he through the door
Where sadly he cam' in.

... I found explained at Mental Floss:


The mark that prevents two adjacent vowels from combining into one syllable is called a “diaeresis” or “trema.” You see it in French (naïve, Chloë, Noël) and in the pages of the New Yorker (coöperate, reëlection).

Although it doesn't separate two vowels here, I presume it serves the same function for the poet, indicating a pronunciation of two syllables as tirl-led, rather than mashed together as "turld."

And the word "tirl" defined: "To make a rattling or clattering sound by twirling or shaking (to tirl at the pin, or latch, of a door.")

Apostrophe usage in The Hunting of the Snark perhaps also for indicating a rhythm?:


When the verdict was called for, the Jury declined,
As the word was so puzzling to spell;
But they vetured to hope that the Snark wouldn't mind
Undertaking that duty as we'l.

And finally, what I interpret as a touching allusion to aging and death:


"We are but older children, dear,
Who fret to find our bedtime near."

Addendum:  More on the use of diacritics (in this case by Tokien) to indicate pronunciation:


English uses the the diaeresis too, but it has mostly been dropped -- I think chiefly because English typewriters didn't have one. If you look in old books, you will occasionally see words like coöperate, skiïng and naïve. As cooperate was at one point a new word... people used the diaeresis to make it clear how it was supposed to be pronounced.

With a hat tip to reader Drabkikker for the link.