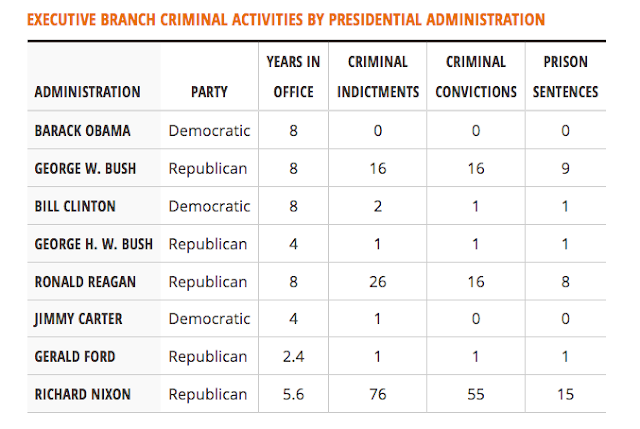 I ultimately relied on Wikipedia’s list of federal political scandals in the U.S., but limited it to only the executive branch scandals that actually resulted in a criminal indictment. I also decided to only go back as far as Richard Nixon, whose participation in Watergate ultimately resulted in him being the only sitting president to ever resign. This lets many other scandal-ridden administrations off the hook—notably that of Warren Harding and the Teapot Dome scandal, and of Ulysses S. Grant and the Whiskey Ring and Black Friday scandals—but so be it.

The chart only includes people who served in the administration, and excludes others (like members of Congress and private individuals) who may have also been swept up and indicted for the same scandal. The “Convictions” list includes both those who went to trial and were found guilty as well as those who plea bargained and pleaded guilty. The “Prison Sentences” should be considered a minimum figure, as Wikipedia's list wasn’t always clear on penalties and I wasn’t able to look all of the unclear ones up.

Full details at The Daily Kos (where you can leave your comments).