If you dig a hole through the earth... 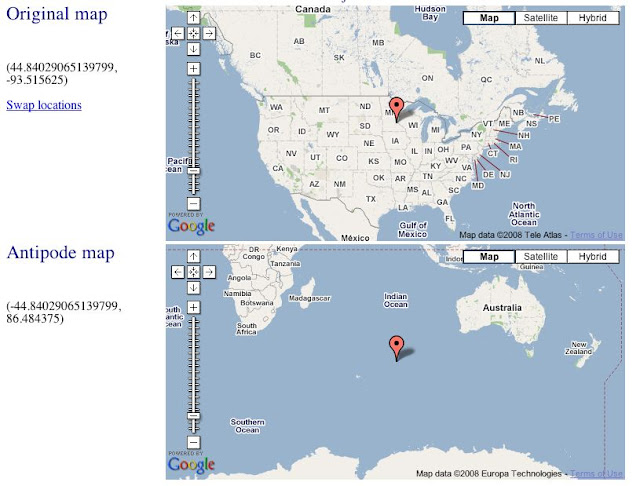 ...you'll end up in China. I remember hearing that as a child. Ignoring for a moment the problem of the magma and the gravitational conundrums one would encounter at the center, it's still untrue. I remember fiddling with a globe and discovering that I would end up somewhere in the middle of the south Indian Ocean.

As an adult I revisited this question and discovered that for most of the people on earth, the antipodes were in an ocean. It's a curious aspect of world geography - most of the large land masses are in the northern hemisphere, with more oceans in the south. And much of the land masses in the south are opposite northern oceans - Africa corresponds to the northern Pacific, and the Aussies would be in the middle of the Atlantic. It must be pure coincidence, though a nagging thought makes one wonder whether there could be a plate tectonic explanation for this.

Now you can explore this on your own. There's a website called Antipodes Map - draggable and zoomable in true Google Map fashion. Click on your location and it shows you what is on the opposite side of the earth.

The Wikipedia entry on the antipodes provides (as expected) an excellent discussion and some relevant composite maps.

Reposted from 2008 (!) to update the links and add this composite map, via Digg. 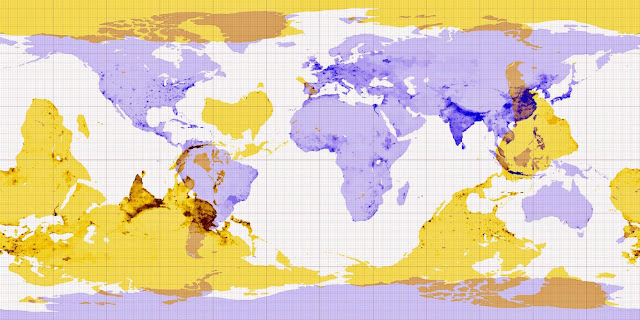