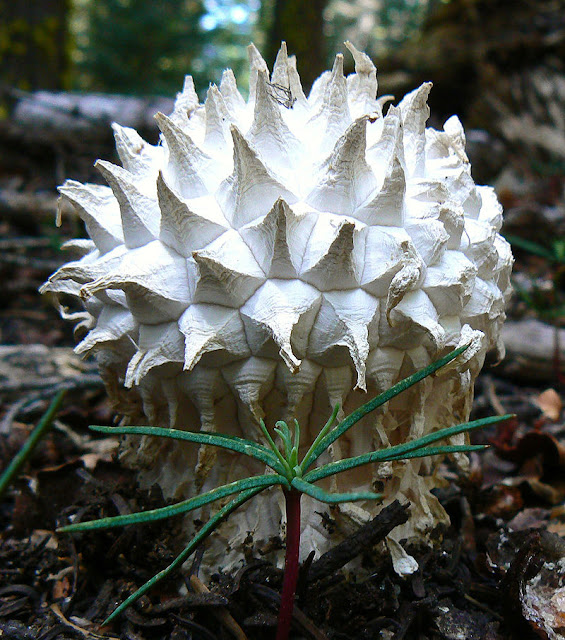 Calvatia sculpta, commonly known as the sculpted puffball, the sculptured puffball, the pyramid puffball, and the Sierran puffball, is a species of puffball fungus in the family Agaricaceae. Attaining dimensions of up to 8 to 15 cm (3.1 to 5.9 in) tall by 8 to 10 cm (3.1 to 3.9 in) wide, the pear- or egg-shaped puffball is readily recognizable because of the large pyramidal or polygonal warts covering its surface.

Originally described from the Sierra Nevada, C. sculpta is found in mountainous areas in western North America, and was found in a Brazilian dune in 2008.

And it is edible:


Calvatia sculpta is edible, and said to be "choice" by some authors. The taste is described as "mild" and the flesh has no distinguishable odor. Arora recommends eating the puffball only when it is firm and white inside, as older specimens may have a distasteful iodine-like flavor. The puffball may be preserved by freezing fresh or partially cooked slices, but their flavor and texture will deteriorate unless cooked immediately after thawing. Recommended cooking techniques for puffball slices include sautéing and coating in batter before frying. C. sculpta was used as a traditional food of the Plains and Sierra Miwok Indians of North America, who called the fungus potokele or patapsi. Puffballs were prepared by drying them in the sun, grinding them with a mortar, and boiling them before eating with acorn soup.

No thanks.  Please pass the Doritos.