A new theory about fluorescent coral 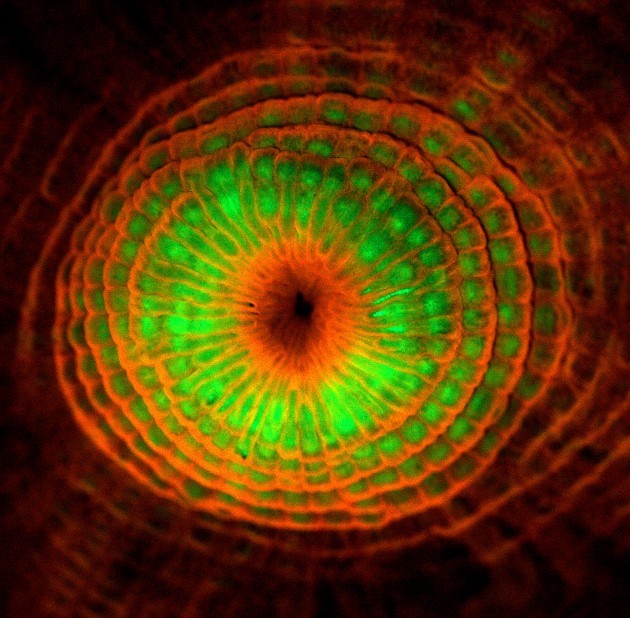 It has been known for some time that some shallow-water corals use fluorescence as a protective mechanism:


...the pink and purple fluorescence in shallow waters act as a kind of sunscreen. The fluorescent pigments absorb damaging wavelengths of light and emit it as pink or purple light, protecting the single-celled organisms called zooxanthellae that live symbiotically inside coral. Zooxanthellae are photosynthetic and they provide the coral with food in exchange for shelter.

But now the phenomenon has been observed in coral at low-light depths:


Coral may be converting blue light into orange-red light that penetrates deeper into the coral tissue, where photosynthetic zooxanthellae live. Fluorescence, by definition, is the absorption of light in one color and the emission in another... Blue light may be good at penetrating water and for photosynthesis, but it doesn’t penetrate the coral’s tissues well. And zooxanthellae can live deep inside coral...

Mikhail Matz, a coral scientist at the University of Texas at Austin, says he’s not yet convinced this completely explains the function of the fluorescent pigment in deep water corals. As humans with eyes, we tend focus on the light coming from these coral. But maybe the glow isn’t the point. “The fluorescence may not be the important aspect. It could be a side effect,” he says. It could be that fluorescent proteins are actually there just to absorb light as the part of some metabolism, and the glow that we see is incidental to its true purpose.

Further discussion at The Atlantic.   The paper is at Proc Roy Soc B.