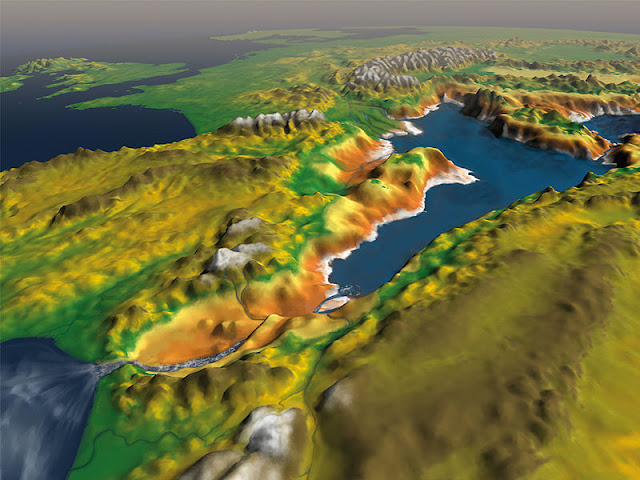 According to this model, water from the Atlantic Ocean refilled the cut-off inland seas through the modern-day Strait of Gibraltar. The Mediterranean Basin flooded mostly during a period estimated to have been between several months and two years. Sea level rise in the basin may have reached rates at times greater than ten metres per day (thirty feet per day).  Based on the erosion features preserved until modern times under the Pliocene sediment, these authors estimate that water rushed down a drop of more than 1 kilometre (0.62 mi) with a discharge of up to  2×108 m3/s (7.1×109 cu ft/s), about 1,000 times that of the present day Amazon River. Studies of the underground structures at the Gibraltar Strait show that the flooding channel descended in a rather gradual way toward the bottom of the basin rather than forming a steep waterfall.

Not all scientific studies have agreed with the catastrophistic interpretation of this event. Some researchers have estimated that the reinstallment of a "normal" Mediterranean Sea basin following the Messinian "Lago Mare" episode took place in a much more gradual way, taking as long as 10,000 years.

I do hope someone invents time travel soon, because I'd like to go back and watch this.