One of the classic sensual pleasures of the holiday season is the scent of balsam permeating a home or place of business. Balsam trees, wreaths, and swags are used to decorate living rooms, doors, windows, and mantelpieces. In doing so, we probably never question where the balsam comes from; if we give it any thought, we assume it is harvested from commercial tree farms or represents a reuse of forestry waste products.

This fall I visited a lot (in a platted subdivision) where I’ve been clearing brush in preparation for building, and encountered two young men with a pickup truck. I thought they were hunters, but when I greeted them and saw no guns they told me they were searching for “balsam balls” (which I interpreted as “witches brooms”). I told them they were on private property, and cordially suggested that in the future they make use of a plat book to ascertain which properties were public and private. They indicated that they would continue searching, but wouldn’t disturb anything near the driveway, and they headed into the woods.

When I returned the next day I was shocked by the devastation they had wrought on the property. About a dozen balsam trees - all within a few yards of the driveway - had been stripped of branches. After a moment’s reflection I realized that they had been hunting “balsam boughs” for the holiday decoration trade.

Perhaps more disappointing than the theft itself was the technique they had used: 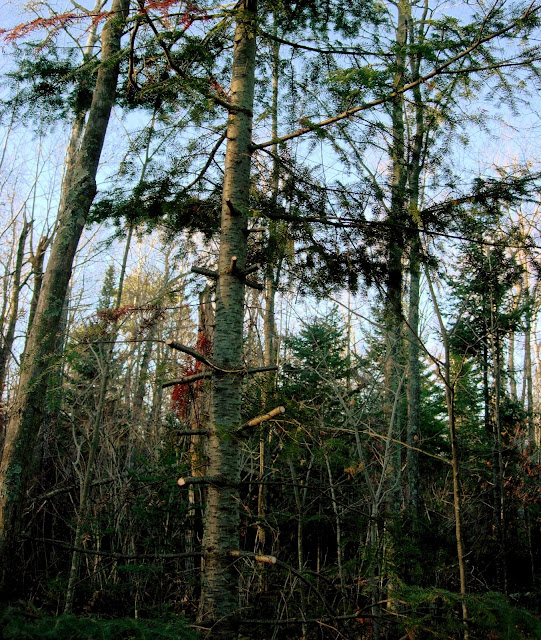 This wasn’t a matter of pruning a few branches from each tree; rather, the trunks had been stripped bare to the height reachable by a grown man wielding a lopper. Each of these trees is now essentially standing deadwood. And this from two young men whose heritage should reflect a deep respect for the natural environment.

The Minnesota DNR reported in 2004 that approximately 4000 tons of balsam boughs are harvested annually from our forests, each ton yielding roughly 400 wreaths; the state’s balsam bough industry had annual retail sales in 2004 topping $20 million. The vast majority of this trade is managed well, with bough-collecting permits obtained at state, tribal or county offices, depending on where the worker plans to gather material. As my experience shows, there are at least a few “rogue” workers who respect neither private property rights nor the environment.

(This is a repost of an item I originally wrote for this blog in December of 2007. With the holiday season approaching again and the economy even worse, property owners should be aware that trees are $$$ in some people's eyes. And not just evergreens - a mature walnut or other hardwood can yield a lucrative return for someone willing to work a few hours with a chainsaw...)


Thieves are illegally cutting down thousands of birch trees in northern Minnesota and Wisconsin to make a quick buck off city dwellers who love the paper-white logs, limbs and twigs in their home decor...

Birch items are “kind of a hot item in home decor in both contemporary and traditional spaces,” said Scott Endres, co-owner of Tangletown Gardens in Minneapolis. “Folks in urban areas appreciate the beauty of it and like to have a little of the North Woods showing up in their outdoor containers, as well as their indoor decor. Interior designers use it a lot.” 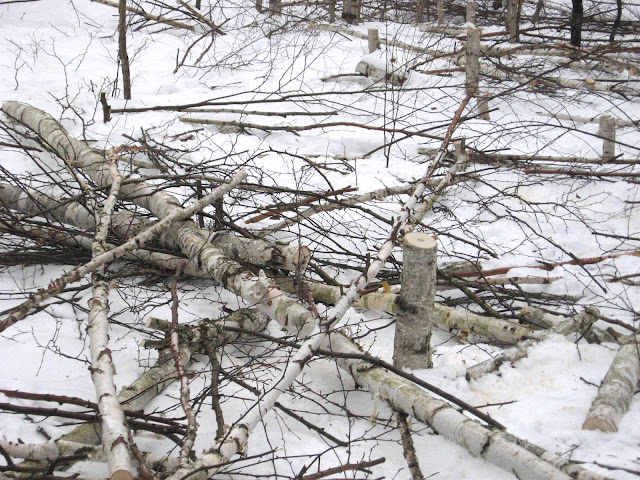 The trees being targeted are generally young — 10 to 15 years old, about 2 to 4 inches in diameter and about 10 to 18 feet high, often growing in secluded areas... “It doesn’t matter if it’s state-owned or county-owned or privately owned,” he said. “If there are birch trees there, they cut them.”

Richter figures “unsophisticated, small-time thieves” who have a daily drug habit to support are responsible for most of the clear-cutting. Many of them formerly relied on stealing scrap metal. “They’re grabbing and stealing anything they can convert into money,” he said...


Richter said once the sap starts running, the birch trees may be less marketable because the paper bark is more susceptible to peeling off. “But once it freezes again, it’s going to be back on,” Richter said. “And it could be a bigger problem next year.”