"The Nazi War on Cancer"

Those who are looking for something "different" to read might want to consider Robert Proctor's The Nazi War on Cancer (Princeton University Press, 1999).

Acknowledging the well-publicized atrocities of Nazi medicine, the author focuses instead on the party's systematic efforts to decrease the prevalence of cancer, especially through a campaign to ban smoking ("masturbation of the lungs").  Hitler was a nonsmoker, as were Mussolini and Franco (cf. Roosevelt, Stalin, and Churchill as enthusiastic public smokers).  Nazi researchers were among the first to recognize the link between smoking and lung cancer.  Smoking was known to cause cancer, but the link had been established only for mouth, lip, and nasopharyngeal cancers (related to smoking pipe tobacco).  It was not until the introduction of cigarettes allowed smoke to be inhaled deeply that the causation of lung cancer became detectable).

The cover (embedded above) includes a Nazi-era poster depicting a leather boot stomping on a cigarette, a cigar, and a pipe.  There were many such posters in a broad-ranging public campaign against smoking (embed at right - "You don't smoke it.  It smokes you.") 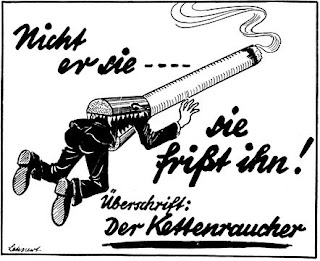 Throughout this period, magazines like Genussgifte (Poisons of taste or habit), Auf der Wacht (On guard), and Reine Luft (Pure air) published a regular drumbeat against this "insidious poison," along with articles charting the unhealthful effects of alcohol, teenage dancing, cocaine, and other vices. Dozens of books and pamphlets denounced the "smoking slavery" or "cultural degeneration" feared from the growth of tobacco use. Tobacco was branded "the enemy of world peace," and there was even talk of "tobacco terror" and "tobacco capitalism." Karl Astel of Jena labeled tobacco "an enemy of the people" (Volksfeind), and at least one medical thesis--on tobacco addiction--characterized cigarettes as "coffin nails."  Hitler himself in 1941 denounced tobacco as "one of man's most dangerous poisons."

In the late 1930s and early 1940s, antitobacco activists called for increased tobacco taxes, for advertising bans, and for bans on unsupervised vending machines and on tobacco sales to youth and to women in their childbearing years. Activists called for a ban on smoking while driving and for an end to smoking in the workplace. The Hitler Youth and the League of German Girls both published antismoking propaganda, and the Association for the Struggle Against the Tobacco Danger organized counseling centers where the "tobacco ill" (Tabakkranke) could seek help.

If you are interested in learning more, but can't find the book in your local library, Robert Proctor incorporated much of the information in an article in the Bulletin of the History of Medicine.  There is also a relevant page in Wikipedia.

(I'm not a newbie blogger.  I don't want to spend dozens of hours curating comments about Nazis, so I'm going to close comments for this post).