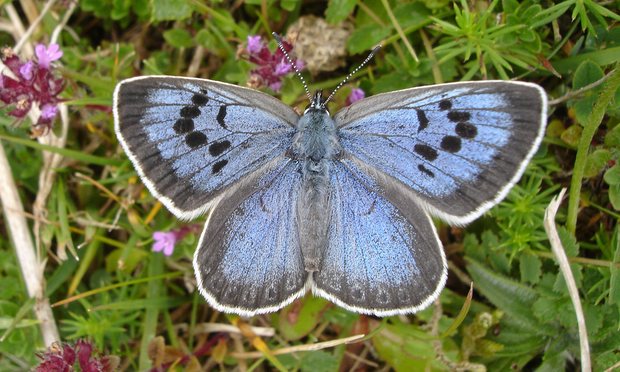 
An insect enthusiast who illegally captured and killed specimens of Britain’s rarest butterfly, the Large Blue, has been given a six-month suspended prison sentence...

Police later raided his terraced home in Cadbury Heath, near Bristol, and found a large number of mounted butterflies, including two large blues...

Michael Hartnell, defending, said: “He accepts the enormity of what he has done. He only had one from each site, but he accepts that if everybody did that they would die out.  [N.B. I am so delighted to see someone using the word "enormity" in the proper context.]

Here's one reason it's endangered:


In Victorian times the large blue was highly prized by collectors because of its wonderful colour and its rarity, as its unusual life circle means it cannot be bred in captivity.


The remarkable life cycle of the large blue means it can only thrive in very particular habitats. Eggs are laid on the flower buds of wild thyme or marjoram. The larvae burrow into the flower heads and when they are about 4mm long drop to the ground and wait to be found by foraging red ants, attracting them with sweet secretions from a “honey” gland. The ants place them in their brood chamber and the larvae feed on ant grubs. They turn into butterflies, crawl above ground, and fly in midsummer.

Pugh said there was a market still for butterfly specimens. “People buy up old labels and cases and add in newly killed specimens.” The magistrates who sat at Cullen’s trial were told large blues can fetch £300 each.

The morphology and the life cycle of the Large Blue are very similar to the Karner Blue, found in the United States.